During the school year, I’m all about fast, simple, and nourishing breakfast options.

I keep a set breakfast menu for the school year, and the menu doesn’t change much: healthy yogurt bowls, oatmeal, smoothies, eggs (fluffy scrambled eggs, Instant Pot hardboiled eggs , egg cups, or sunnyside up eggs), prepped baked goods (banana bread, muffins, toast, etc.), chia pudding (for me, when I workout early in the morning before a heartier breakfast), pancakes or waffles (always prepped in advance and waiting in the freezer), and sometimes a prepped-in-advance hash. 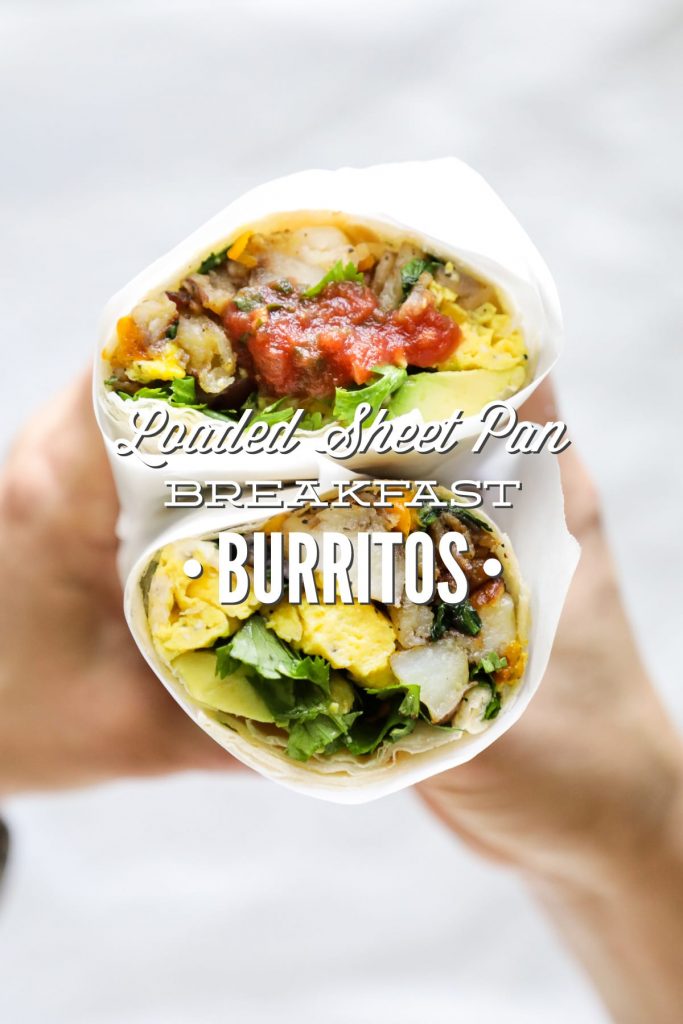 I love the routine and dependability of a fixed breakfast menu during these busy months, since I have one less thing to think about in the morning. On Monday, we have eggs and toast. On Tuesday, everyone in the family knows they’re going to be greeted with a smoothie and egg. And so the week continues. 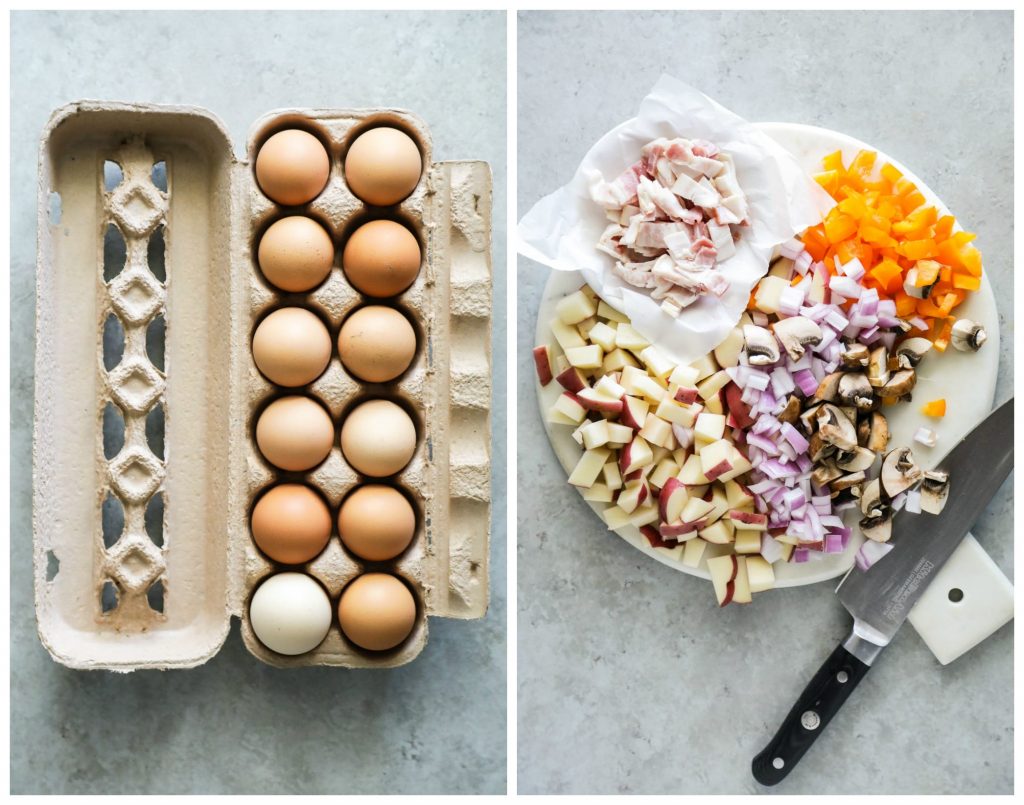 I know this type of scheduled eating probably sounds like it gets boring after a couple of weeks, but I’ve found that there’s a place for creativity even with boundaries.

Sure, Monday may be an egg and toast day, but that doesn’t mean we always eat scrambled eggs and a slice or two of sourdough bread. Sometimes I may use extra veggies from the previous night’s dinner to create a veggie and egg scramble. Other times, we may have “jammy” boiled eggs. There are also times when the toast will be plain and simple. 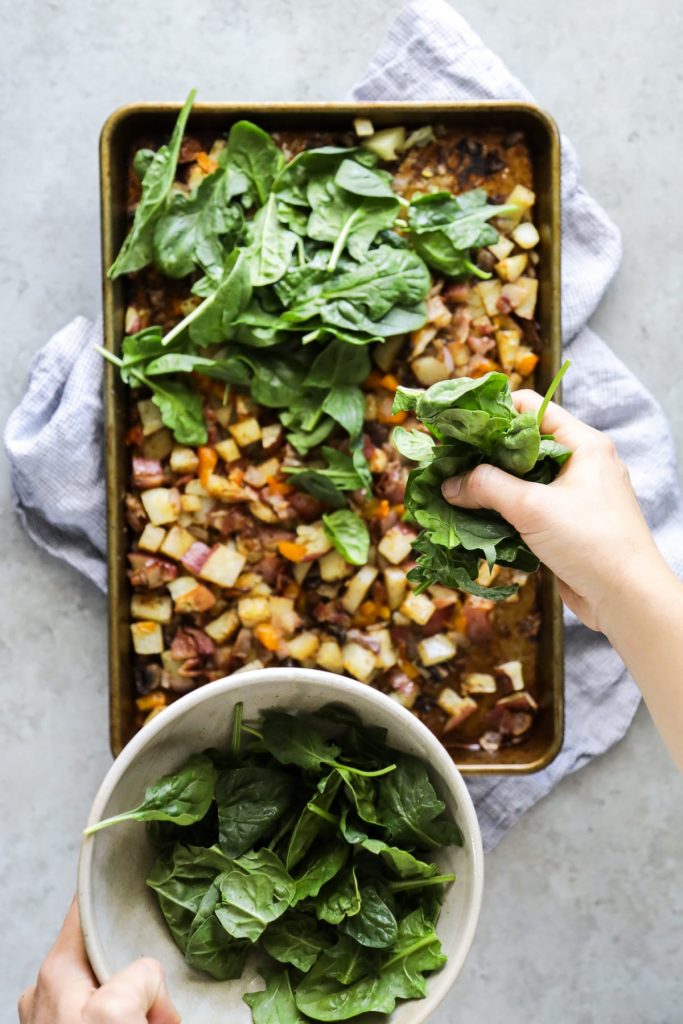 Now that summer break is in full swing, I’ve stepped away from my methodical approach to breakfast in order to embrace more spontaneity in the kitchen during the early morning hours. Sure, our breakfasts still feature the same ingredients (eggs, oats, veggies, etc.), but I’ve tried to slow down and spend extra time making something a bit different than our normal options. 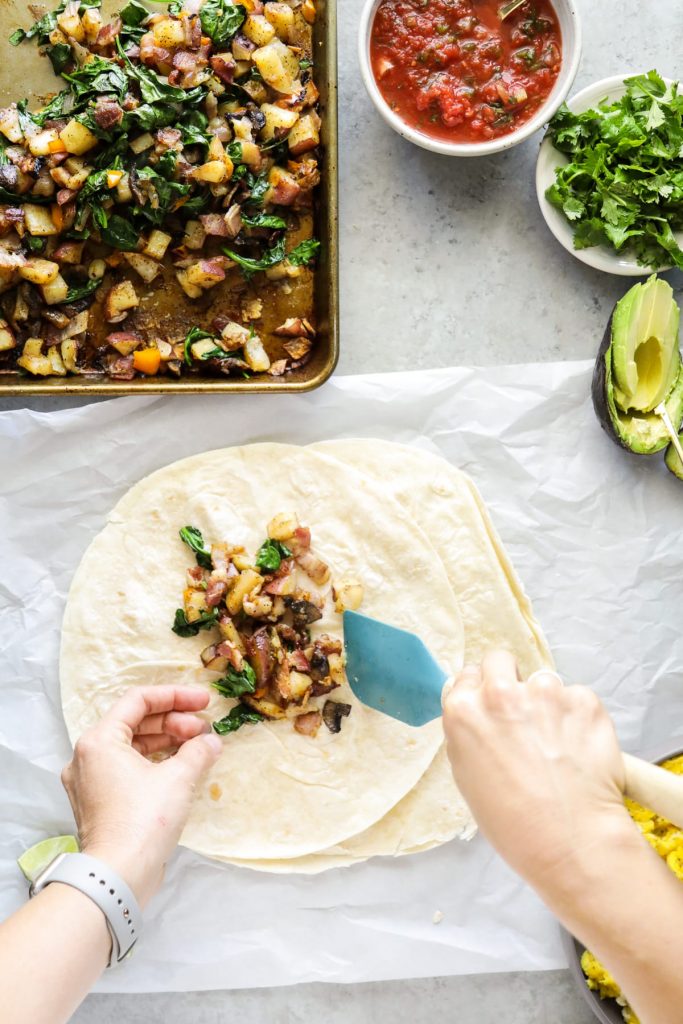 One of the slow-down breakfast meals I’ve started making is, breakfast burritos.

Breakfast burritos aren’t new to me, nor are they new to the blog, but making these burritos in the morning versus prepping them in advance is something new. Since I haven’t been prepping the burritos in advance, I’ve been able to play around with all sorts of different veggies and ingredients, without having to concern myself about how well the ingredients freeze and reheat. 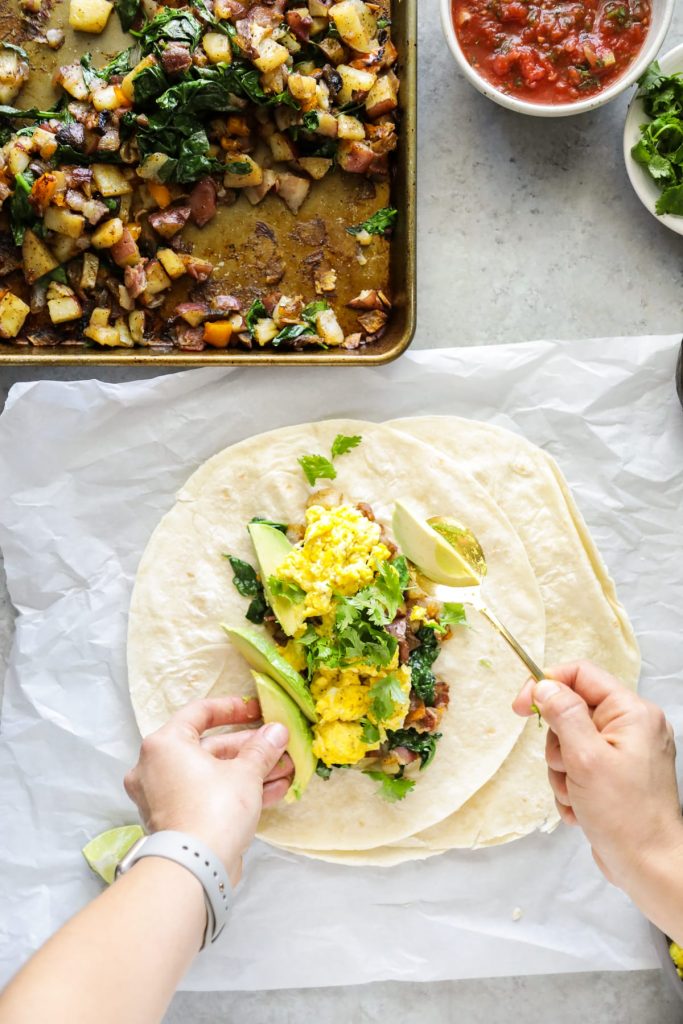 Out of all my breakfast burrito creations so far, our favorite has been the hearty veggie and egg burritos, which happen to also be the easiest breakfast burritos to make. Most of the veggie filling is cooked on a sheet pan. And while the oven works its magic with the veggies, bacon, and spinach, the eggs are cooked on the stove-top, and the cilantro and avocado are chopped and sliced. Once everything has been cooked, chopped, and warmed, the burritos come together in just a couple of minutes. Since my sheet pan does most of the work in this recipe, I’ve decided to give it the credit it deserves in the title. 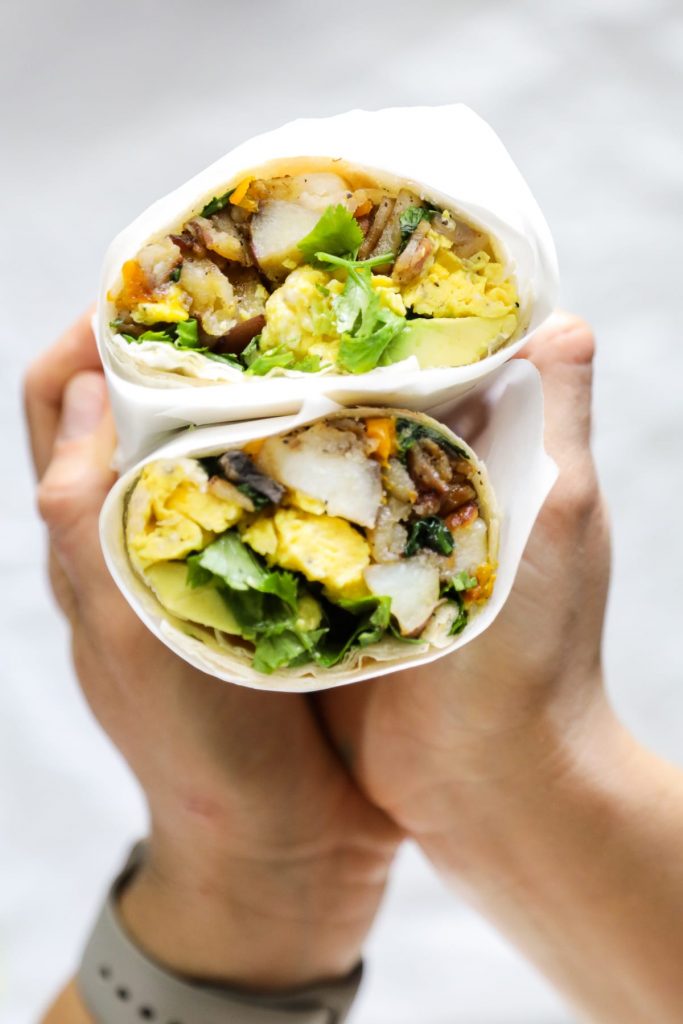 I definitely plan to keep making these burritos well after the summer comes to an end. Since they take a bit more time to make than the typical weekday breakfast meals on my school-year rotation, they’ll become a special weekend breakfast treat starting in September. Freshly-made pancakes and waffles are already seen as a special treat on Sunday mornings (a time when we slow down, eat outside on the porch, and sip coffee in our pjs until noon), and now these loaded breakfast burritos can be added to the list of weekend options. 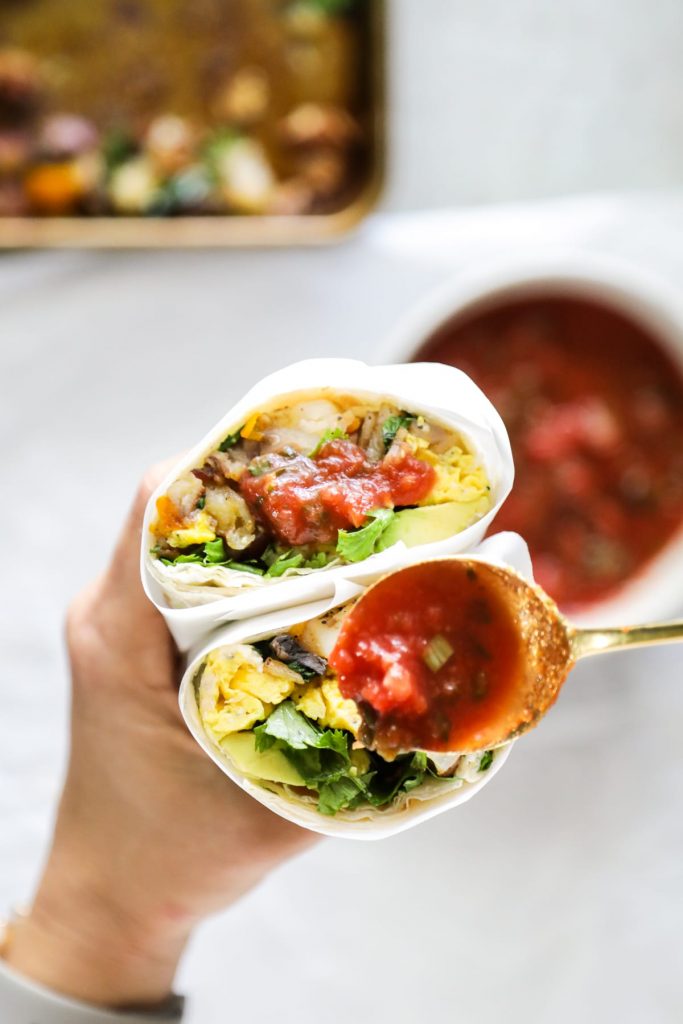 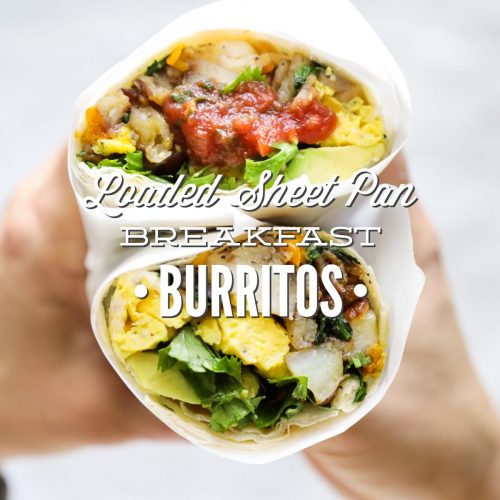 *I use red or Yukon Gold potatoes. Leave the skins on the potatoes, there's no need to peel!  Make-Ahead Thoughts: I think these burritos would keep well in the fridge for about two days. I haven't tried freezing these burritos, but it's a shot (just try one at first).  Vegetarian Option: These can easily be made without any bacon. Simply omit the bacon and toss the veggies with 1-2 tablespoons of olive oil or avocado oil. The flavor won't be quite the same (the bacon adds a nice smokey flavor), but they'll still taste great. 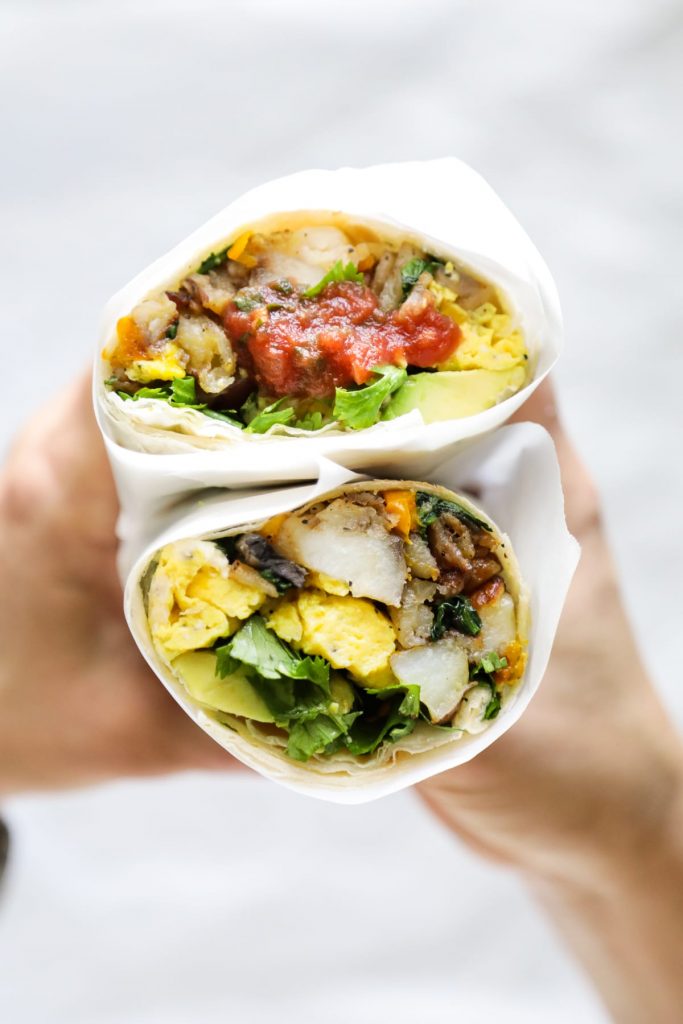