Find the revised and updated version of this recipe here

After I became serious about feeding our family real food, I spent an afternoon investigating the labels on the bread in my local grocery store. First of all, the fact that store-bought bread can last weeks without rotting should have been my first give-away that something wasn’t right. As I read,  I realized that nearly every bread product in the store was loaded with ingredients I couldn’t pronounce. 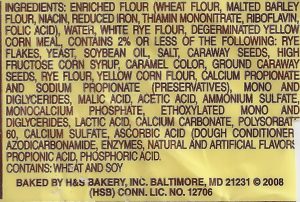 The idea of making my own bread seemed way too domestic in my mind. I had recently left my career to be a mom and now the thought of making bread in my kitchen seemed like a picture from the 1920’s, but if we were going to continue to eat bread, I needed to start. Since then,  I have experimented with a lot of bread recipes. Some consumed a lot of time, some were complete flops, others turned out well but still left me unsatisfied…always looking for the perfect bread recipe. One day while scrolling through Pinterest, I noticed a pinned bread recipe from Simply So Good, like so many other bread recipes,  I pinned it and moved on. A few weeks later, I noticed the recipe again and decided to try it out. As any responsible Pinterest member knows, attempting pinned recipes can either lead to awesome new discoveries or complete failures.

I mixed up the dough, which took all of 10 minutes, and then left the dough on the counter all night! I woke up the next morning, prepared my 7 qt dutch oven by placing it in a 450° oven, 30 minutes later placed the bread inside the pot, put the top on, and 45 minutes later pulled out a loaf of hot, crusty bread! I was hooked! The true test came minutes later when I cut the first slice and topped it with a big piece Kerrygold Grass-Fed Butter… I was in heaven! I finally found the bread recipe I was looking for…easy! crusty! delicious! My 3 year old, our little bread connoisseur, confirmed my notion, along with the rest of the family.

Since that first taste-test, I have tweaked the recipe by experimenting with whole wheat and nuts and seeds. I have also made loaves with Kerrygold Dubliner cheese, fresh chopped rosemary, and lemon zest, and others with cinnamon, walnuts, and raisins. That’s what is so fantastic about this recipe…it’s a great basic bread recipe you can keep simple or spice up! Either way it’s delicious! Even if you are new to preparing foods in the kitchen you can successfully make and enjoy this bread and nourish your family with ingredients which are simple and you are able to pronounce! 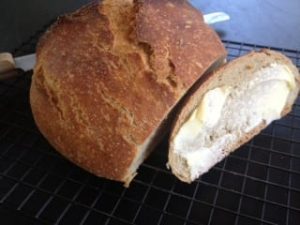 What you will need:

*A pot 5.5 quart pot or larger that can endure an oven temp of 450°, it can be cast iron, stainless steel, an enamel (I use a 7 qt. stainless steel dutch oven)

Crusty Bread (Adapted from simplysogood.com)
Ingredients:
* 2 cups Whole Wheat flour (I used a white whole wheat flour to make it less dense, a hard whole wheat will make this bread very dense)
* 1 cup unbleached all purpose flour
* 1 3/4 teaspoons salt
* 1/2 teaspoon Active Dry Yeast (I like Red Star or SAF)
* 1 1/2 cups water
(If you would like to add something…I usually add a 1/2 cup of various nuts and seeds, such as crushed walnuts, pumpkin seeds, and sunflower seeds, you could also try other combos such as cheese and herbs, or make a breakfast bread by adding cinnamon and raisins…experiment!)
(Note: The original recipe calls for all 3 cups to be unbleached all purpose flour, if you are not used to a bread that is a bit more dense as is common with wheat, I would recommend using all unbleached all purpose flour and gradually substituting in a bit of wheat.)
Instructions:
Mix together Flour, salt, and yeast (and any additional combos such as seeds, nuts, cheese, etc. if desired).
Add the water and mix until the dough appears “shaggy”, it will appear wet and will not be formed.  And that’s it! Cover the bowl with plastic wrap and let it sit for 12-18 hours on the counter.
Go play, fold clothes, go to work, whatever you want to do.
Once you return 12-18 hours later, preheat the oven to 450°.
When the oven has reached this temperature place your 5.5 quart or larger  pot and lid in your hot oven for 30 minutes (empty).
Remove the dough from the bowl and place on a floured surface. Form into a ball and place the plastic wrap over the bread, allowing it to rest while your pot heats in the oven.
After 30 minutes, carefully remove the lid and place your bread ball into the hot steamy pot.
Place the lid on and bake for 30 minutes.
After 30 minutes remove the top and bake for an additional 15 minutes.
Carefully remove the bread and place on a cooling rack.
Allow to cool and enjoy!
I’d love to hear all the great ways you make this super simple bread!
Live Simply,
Kristin
I warmly invite you to join our Facebook community, be inspired on Pinterest, and subscribe to the blog.
16
Facebook Twitter Pinterest
LinkedIn Email