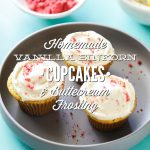 A fluffy, from-scratch yellow cupcake made with einkorn flour.

For the Vanilla Einkorn Cupcakes:

For the Buttercream Frosting:

Depending on how much you fill the muffin pan, you'll probably get between 12-15 cupcakes (12 if you fill them 1/3 way full, and the cupcakes with have "muffin tops"; 15 if you don't want the "muffin top" look)

*Einkorn is known as the oldest variety of wheat making it an ancient grain. The ancient grain is believed to have originated in the Tigris-Euphrates region and is possibly the main grain referenced in the earliest accounts of the Bible. To put it simply, einkorn is the wheat men were eating in the earliest days before modern-day wheat varieties. While modern wheat has undergone hybridization, einkorn still holds true to its original properties. Einkorn is slowly gaining popularity, but is still grown in only a few regions in Europe.

The sweet, ancient grain has a lighter texture and taste than modern-day wheat, and contains a more favorable gluten ratio. People with minor gluten sensitives may be able to consume einkorn without the issues associated with whole wheat due the lack of D-genome, however, einkorn is not gluten-free.

Einkorn looks and tastes similar to white flour. Einkorn is sold in some health food stores and online.

**I believe organic corn starch can be substituted for the arrowroot flour/starch.

Muffin Pan: I use a dark, non-stick muffin pan. If you're using a light, ceramic pan you may need to cook the cupcakes a bit longer than recommended or even keep the oven temperature at a 350F.

Sprinkles? I used crushed dehydrated strawberries in the photos. I also like India Tree company for sprinkles and natural dyes.