A few days ago, we made a sourdough starter. Now the time has come to use that starter to make homemade sourdough bread. 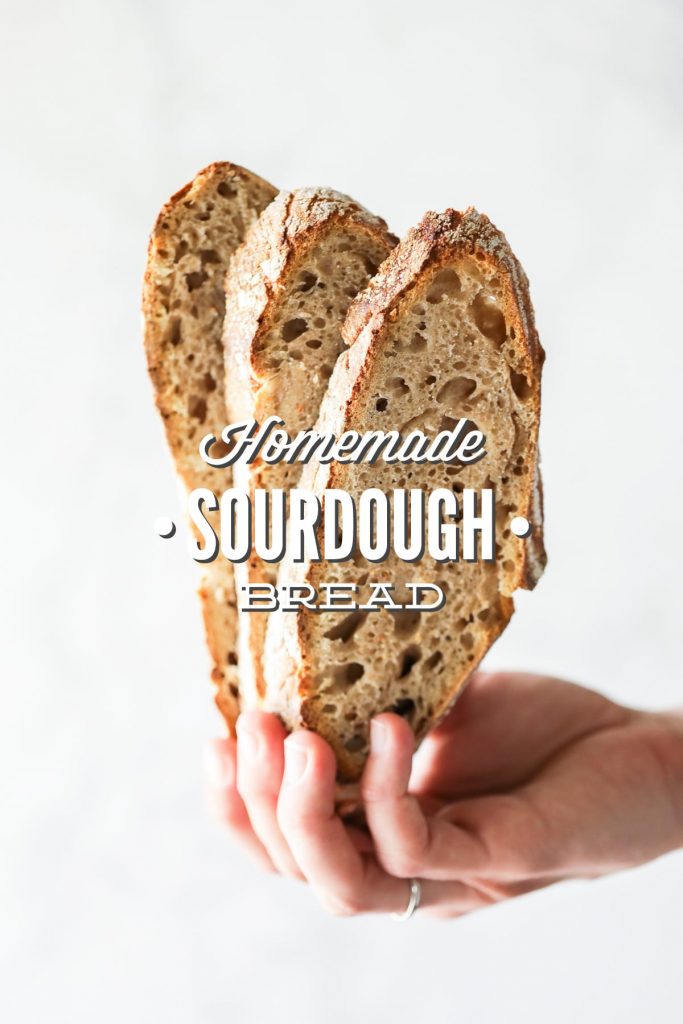 Making sourdough bread causes us to seek out high quality ingredients, get back into our kitchens, and use a time-honored technique to make a very simple and basic food. A technique that’s therapeutic, rewarding, and beneficial for our bodies.

Making sourdough bread is a traditional practice that’s been used to make grains more digestible and to help unlock the nutrients found in grains.

“Traditional societies usually soak or ferment their grains before eating them, processes that neutralize phytates and enzyme inhibitors and in effect, predigest grains so that all their nutrients are more available. Sprouting, overnight soaking, and old-fashioned sour leavening can accomplish this important predigestive process in our own kitchens. Many people who are allergic to grains will tolerate them well when they are prepared according to these procedures.” -Sally Fallon, Nourishing Traditions 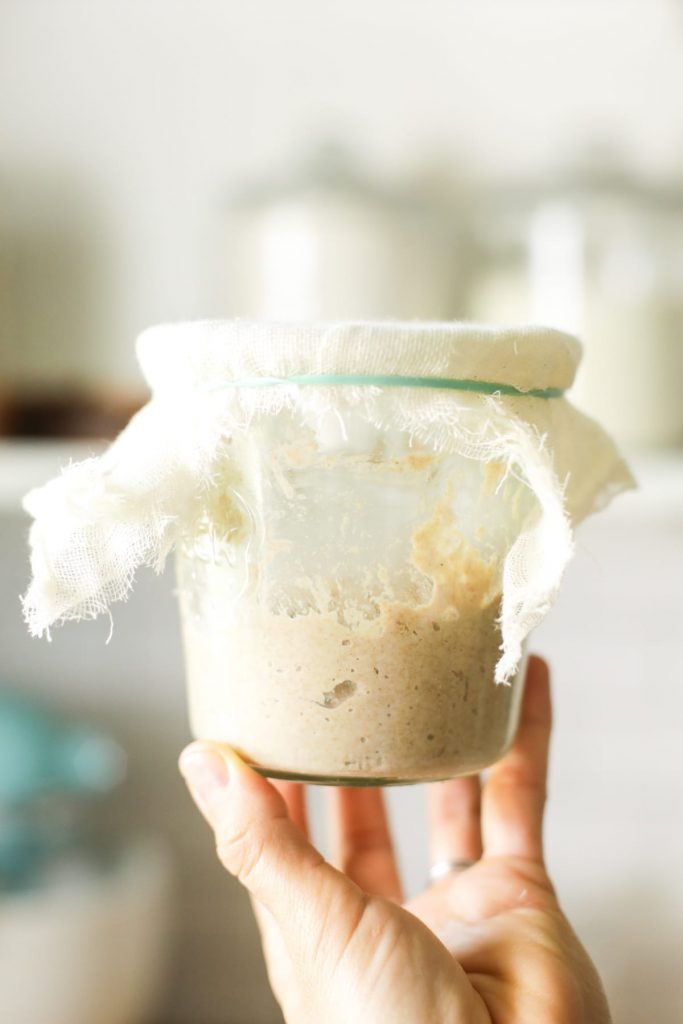 PS: If you have a Netflix account, I highly recommend watching Micheal Pollan’s Cooked Series, particularly part three, Air. Pollan explores the art, science, and reason why we should get back to making sourdough, particularly in a day and age when so many folks are afraid of gluten. If you don’t have a Netflix account, or don’t want to watch the documentary, read this short article.

Most sourdough recipes are written in very complicated formats. The recipe formats are well and good if you know what you’re doing, but, to me, these instructions have made sourdough recipes feel intimidating.

Because of this, I’m going to share today’s recipe in steps. To me, this makes logical sense. This is how I initially wrote down and tweaked this recipe, so why change it up and try to make it all fancy.

Sourdough isn’t a process that’s meant to be fast or quick–that’s why active dry yeast was invented and became so popular–but don’t let this fact discourage you. Most of the process is a hands-off process, which means you can have a life outside the kitchen and still make sourdough bread. 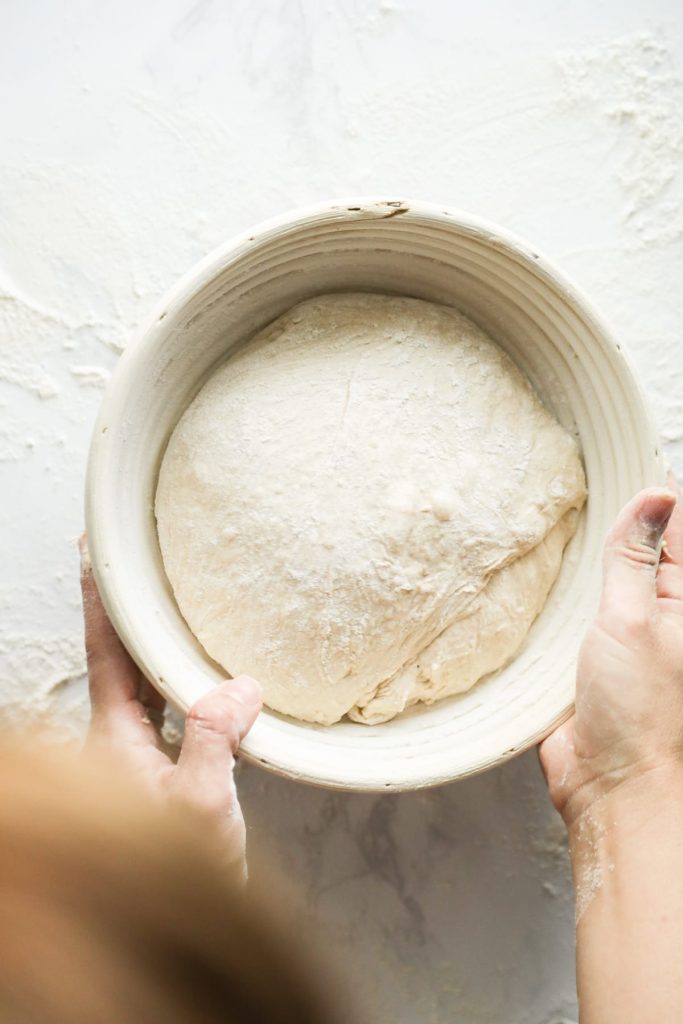 Also, I highly recommend picking up the book, Tartine Bread. The book uses technical, baker terms (which are helpful as you progress along in your sourdough journey) for what I’m calling “steps.” The book is also filled with recipes, from pizza dough to olive sourdough bread. The Tartine recipe and method was published by the New York Times a couple of years ago, too. So if you want to try out the full method, which I’ve adapted to work for my schedule, check out the recipe.

The Tartine method uses some of the starter to create a separate leaven (the yeast, leavening agent in the bread) with a small amount of flour and water. I tried this when I first started using the method, but found this extra step too time-consuming for my schedule. After attending a local sourdough class that recommended skipping the leaven-creation step, I decided to skip it, too. 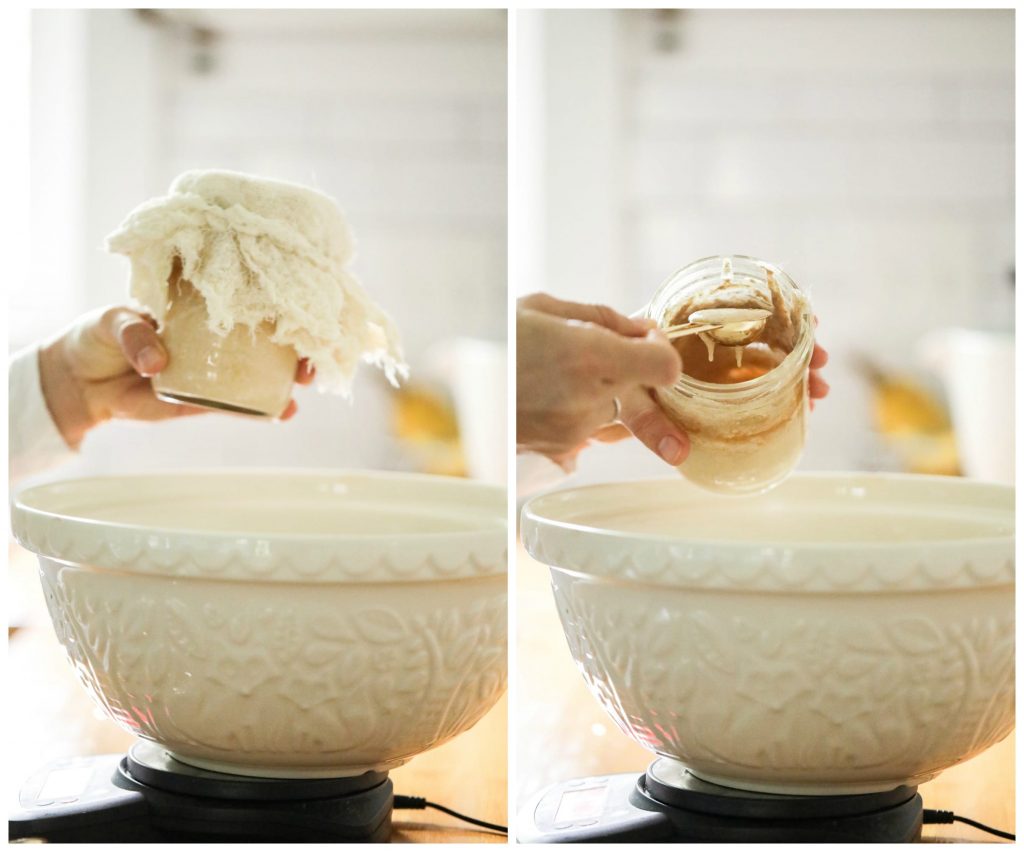 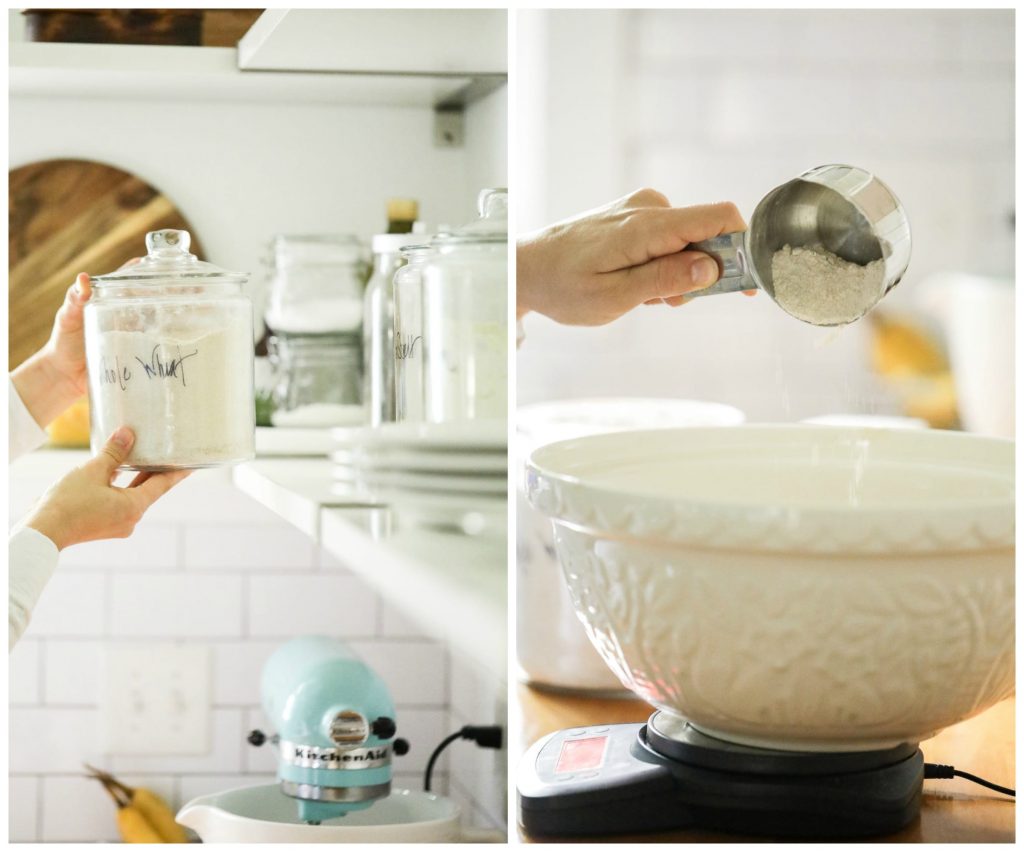 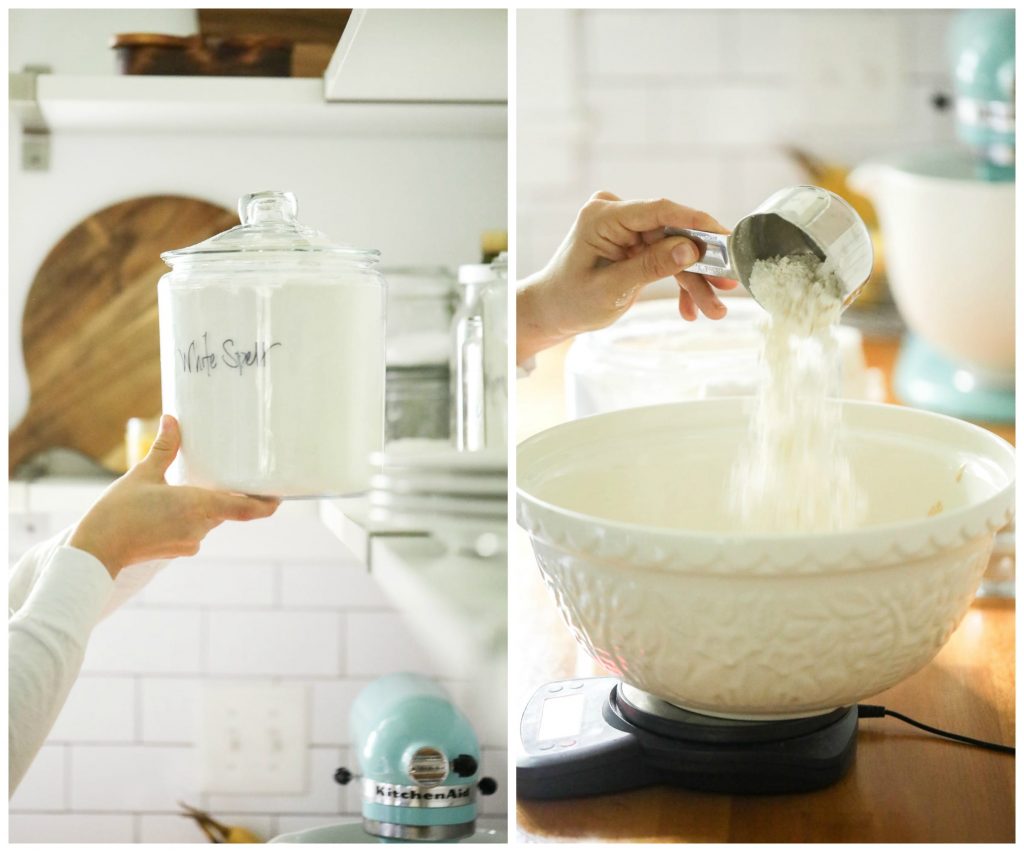 In the first step, I combine some of my sourdough starter (here’s a tutorial), with the majority of the water and flour used to make the dough. At this point, the dough is jagged and thick. The dough is covered with a towel, and then rests on the counter for about 6 hours.

After about 6 hours (I’ve tried other time periods and this works best for my schedule), the dough has spread and increased in size. Now it’s time for step two. 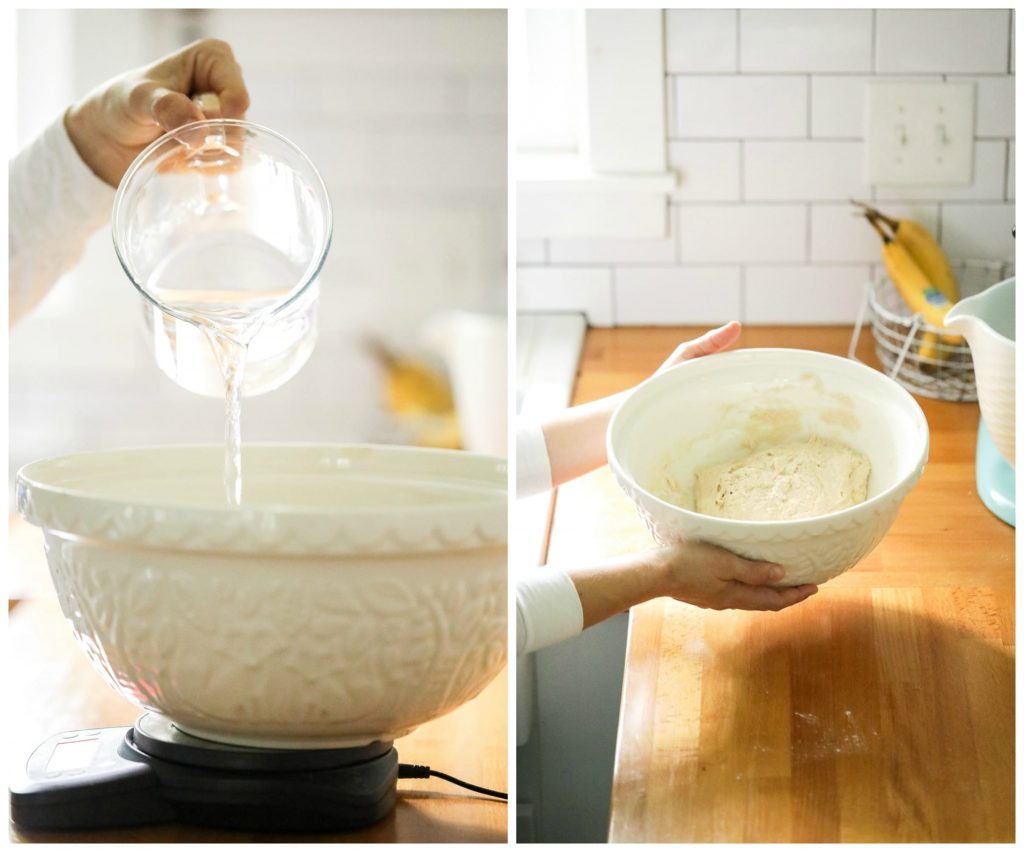 At the beginning of step two, I add more water and the salt to the dough. At this point, the dough is very wet and sticky. I set a timer for 3 hours, and every 30 minutes return back to the dough to knead it or “turn it.”

To knead the dough, I use the method described in Tartine Bread, “…dip one hand in water to prevent the dough from sticking to you and then grab the underside of the dough, stretch it up, and fold it back over the rest of the dough. Repeat this action three times so that all the dough gets evenly developed. This is considered one turn.” 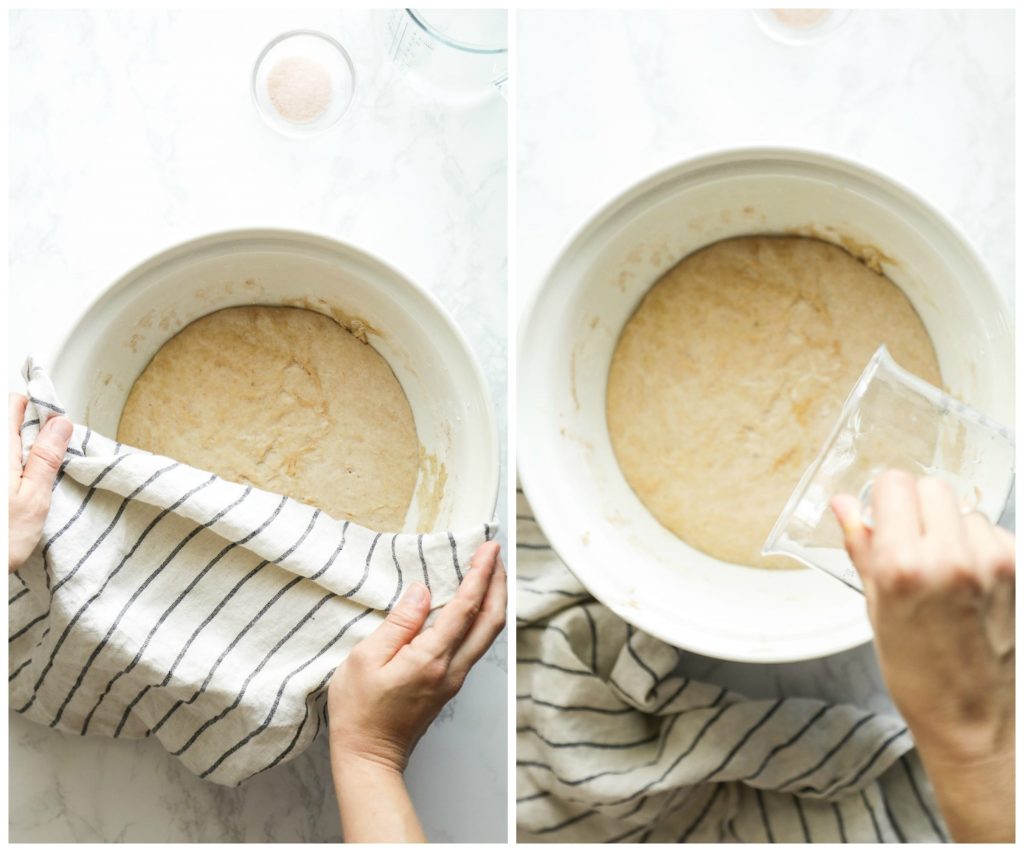 It’s fascinating to watch how the dough develops and transforms itself. By the end of this process, the dough is smooth and easier to handle. Some air bubbles develop in the bread during this process, too. 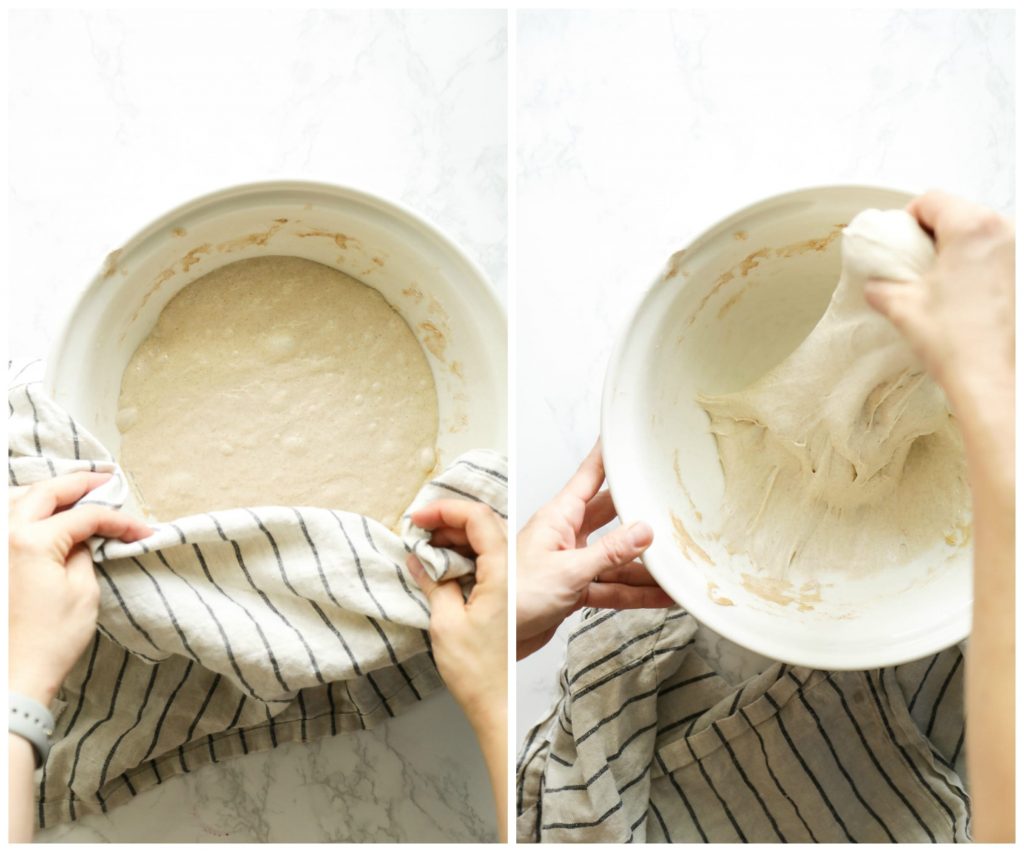 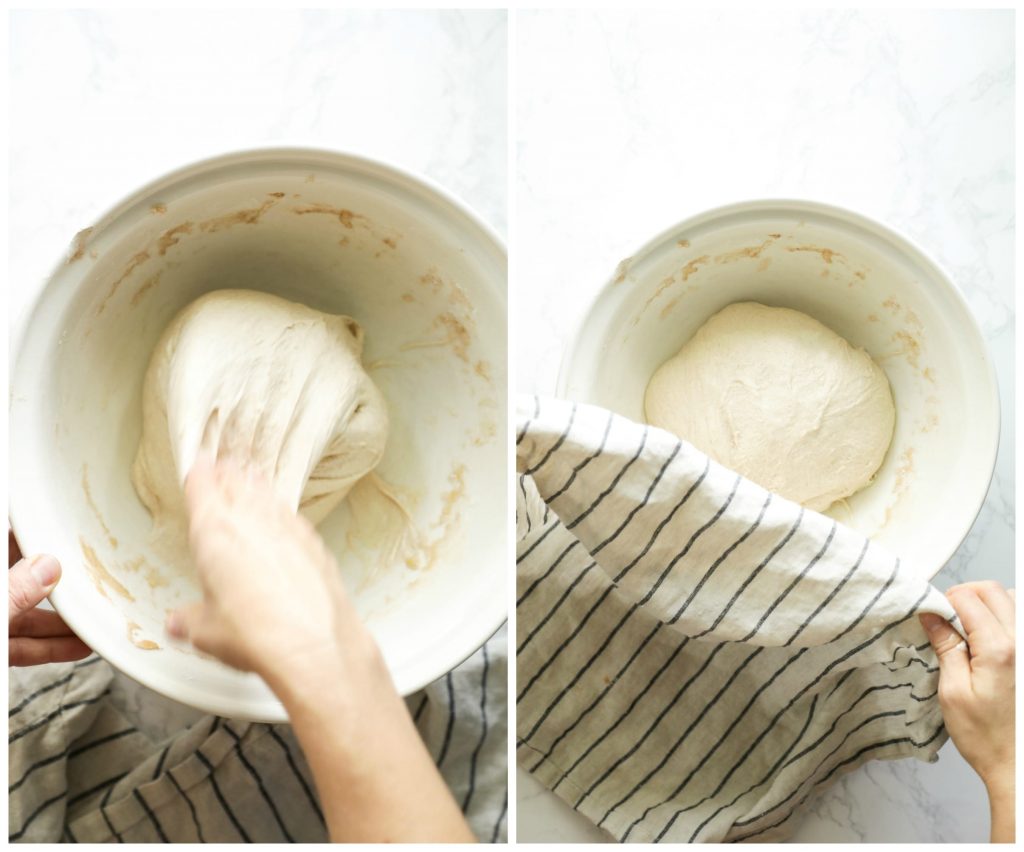 After 3 hours, the dough is ready to be placed on a floured surface and folded. After folding the dough over itself, on each side, I dust the dough generously with flour and cover it with my towel. The dough then rests for 30 minutes, during which time it will flatten out like a thick pancake. 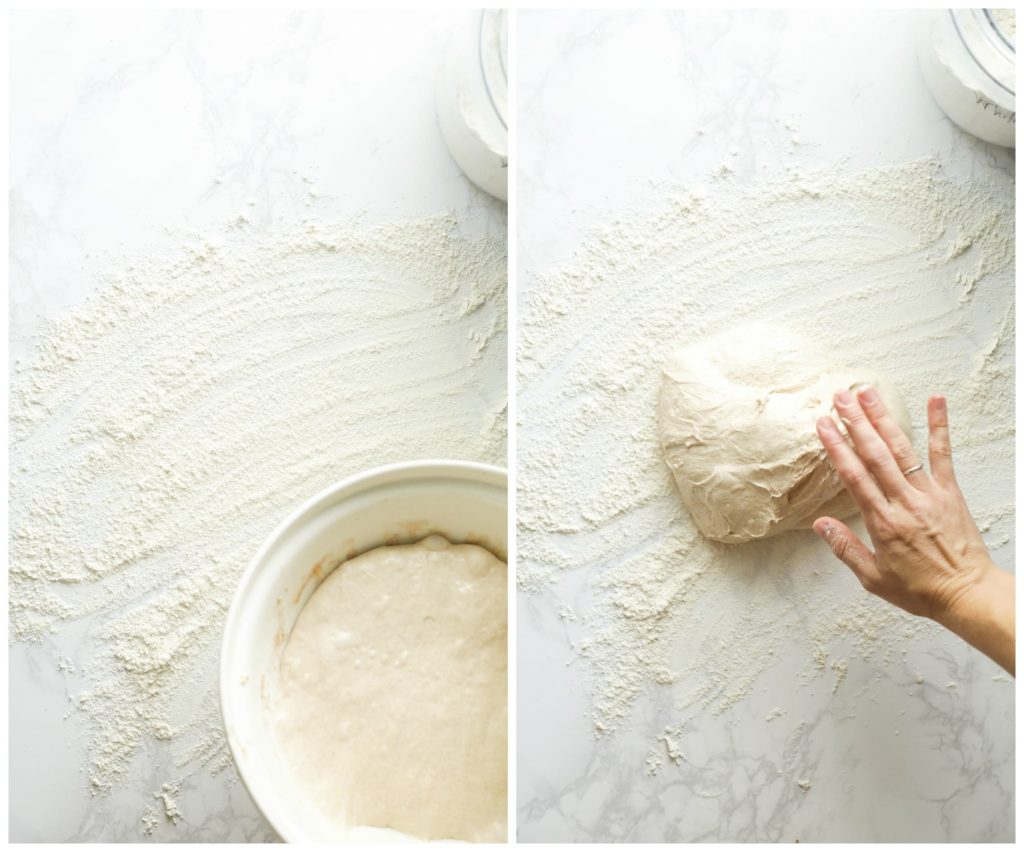 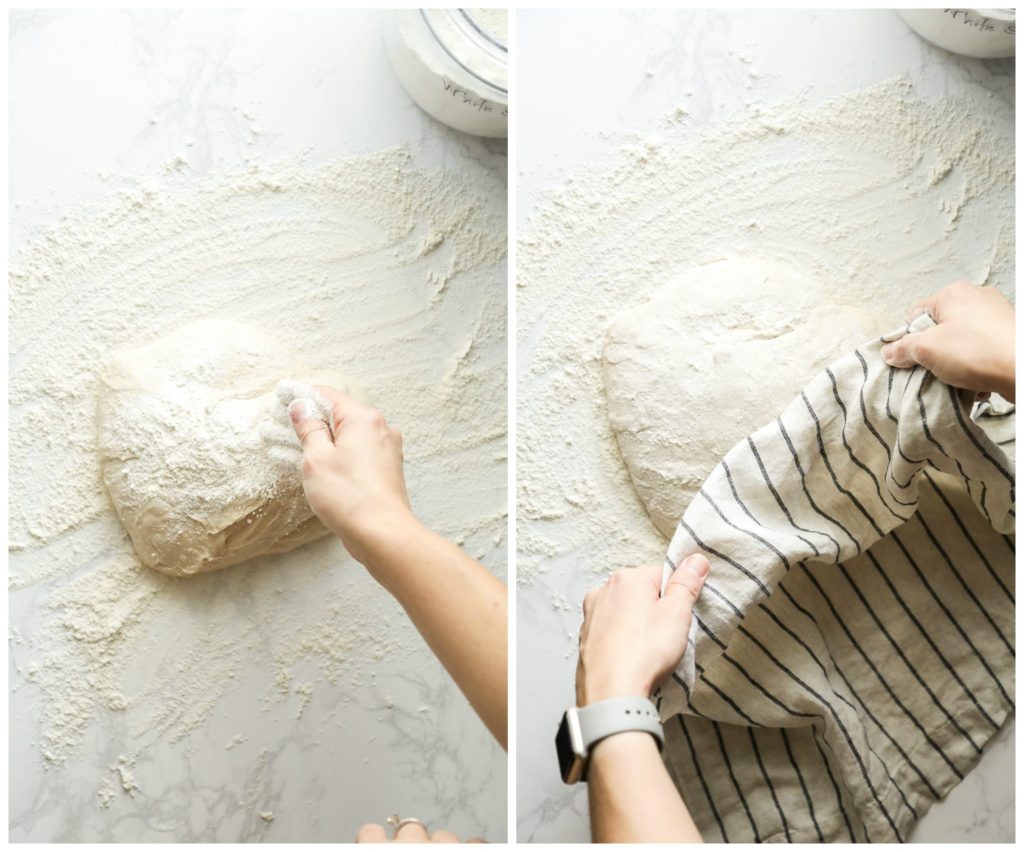 Note: This is a very wet dough, so if this is your first time working with sourdough, you may want to add a bit more flour to the dough (about 30 grams, up to 50 grams) to make it easier to work with.

After 30 minutes, it’s time to form the loaf. Before doing this, I mist my proofing basket with water and sprinkle it, heavily, with flour. To form the loaf, the dough is folded and gently rolled into what Tartine Bread describes as a “neat package.” 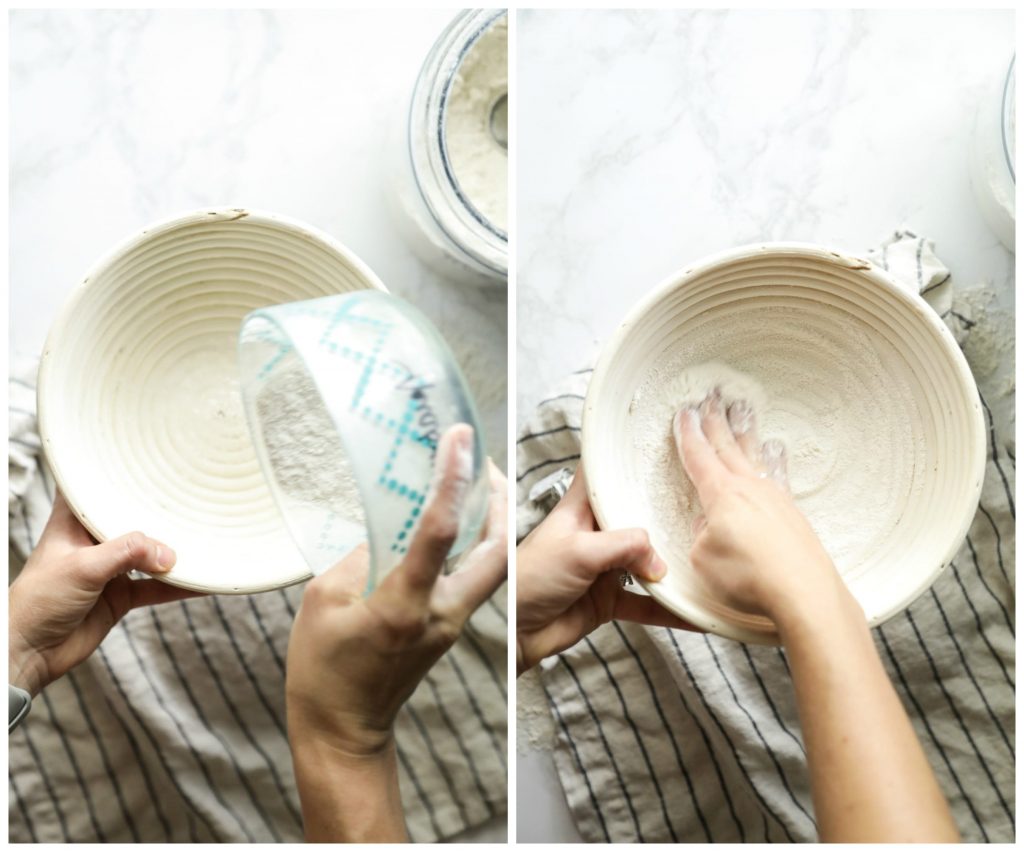 The dough is placed in the floured proofing basket, and then into the fridge it goes to rest overnight. 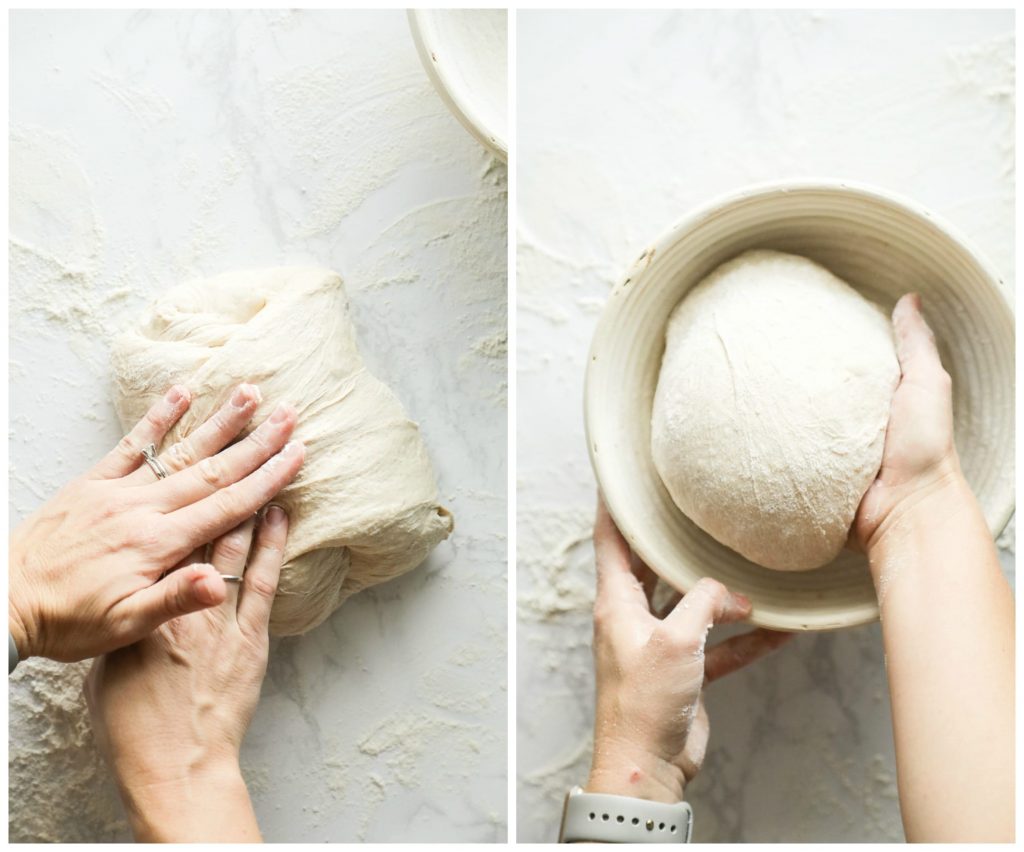 Once removed from the oven, and the Dutch oven, the bread is ready to rest and cool. 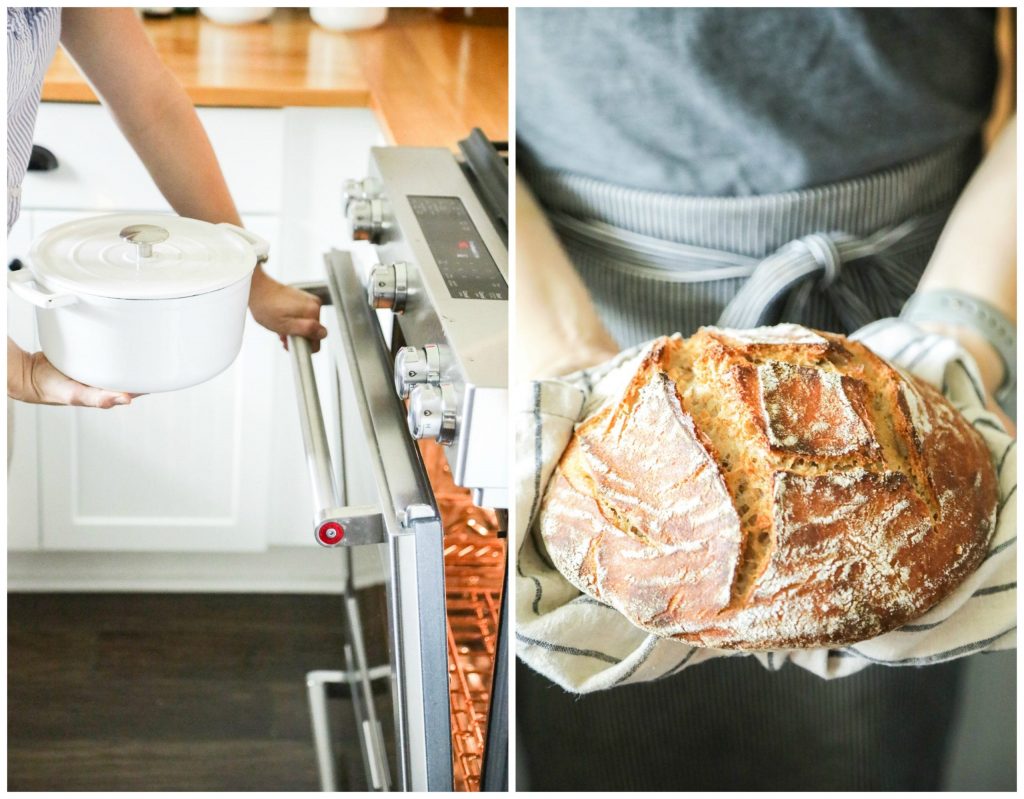 Sourdough bread is just as much of an art as it is a science. No two loaves are the same, and no two methods are identical (thanks to different environments, schedules, and personal taste preferences).

The more you make sourdough bread, the more you can tweak and perfect your ideal bread, and the process that goes into making the bread. This recipe and method, which I’ve tweaked from Tartine Bread and the classes I’ve taken in my local community, works for my schedule and produces a loaf of bread that’s slightly sour, but too sour; slightly dense, but not too dense; slightly imperfect, but absolutely perfect to me and my family. 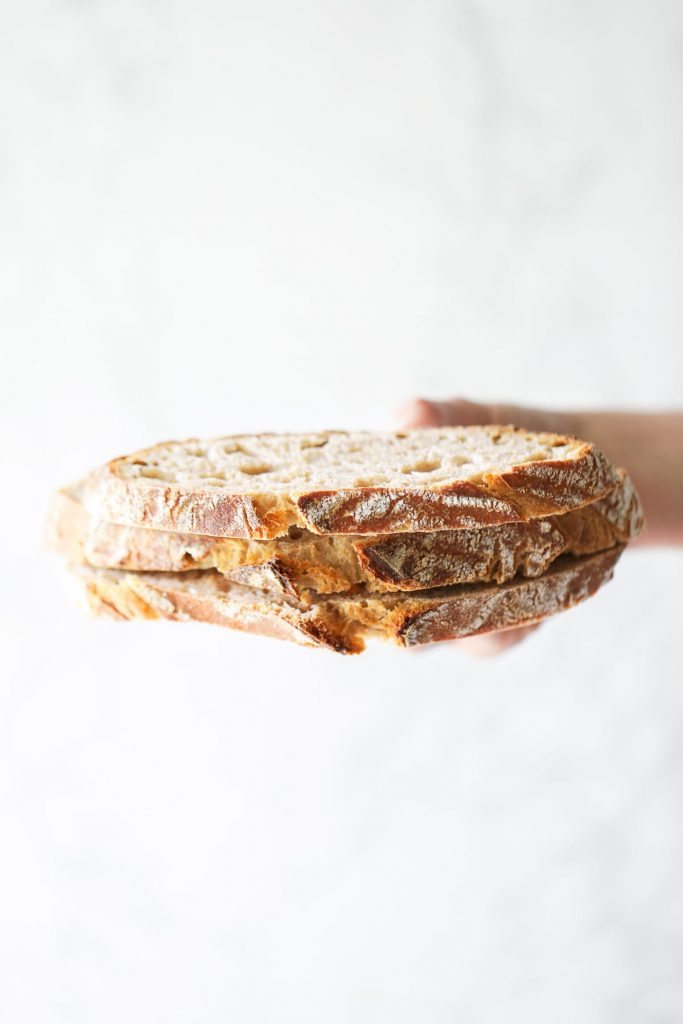 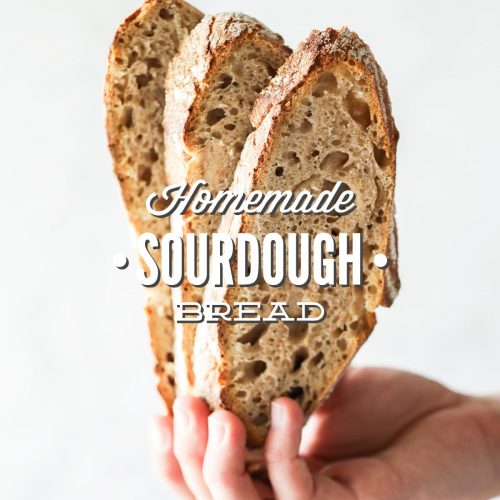 *Try to use a starter that's been fed in the last 12 hours--so it's fresh and very active. After using some of the starter to make the bread, you'll want to feed your starter. You shouldn't need to dump any of the starter (since roughly 50% just went into your bread) before feeding.  **The price on Amazon is much higher than what I pay in the store. I purchase the white spelt flour (and the rice flour) from Whole Foods. I believe the spelt flour costs $10 for the same bag. I've tried making this bread with both 100% whole wheat and stone ground spelt, and I don't care for either one. The texture is far to dense for me. You're welcome to try stone ground spelt, if desired, just know that the texture may be a bit more on the rustic side and the flavor may be, too. All-purpose flour is the flour Tartine Bread calls for in the book. Tartine Bread does offer a 100% whole wheat recipe in the book.  Don't worry if the bread looks like it's a "flop" when you remove it from the bowl and drop it in the Dutch oven. It's okay! I've had this happen several times, usually because I didn't add enough flour to the proofing basket to prevent the loaf from sticking. The bread will be fine, don't mess with it in the hot Dutch oven. If you find that the dough continues to be difficult to remove from the proofing basket, try adding the 30 grams (up to 50 grams) of spelt flour during the step 2.  As you practice the art of making sourdough bread, you'll learn what to expect at each stage, including what the dough should feel like and what it should look like. Just like with anything, the more you practice the better you get. You'll also be able to develop a schedule that works best for you. I begin with step one in the morning, set a timer, and then come home in the afternoon/early evening and start step two while I'm making dinner. After the dishes, I finish up on step two and step three. The next morning I bake the bread (step four). During the school year, I make bread on Saturday and then bake the bread on Sunday.  If your first loaf comes out too flat (the loaf spreads and doesn't hold its round shape), try adding the extra 30-50 grams of spelt flour during step 2, as talked about in the recipe. This should fix the issue. The bread will still be usable and tasty, even if it spreads and flattens while baking. 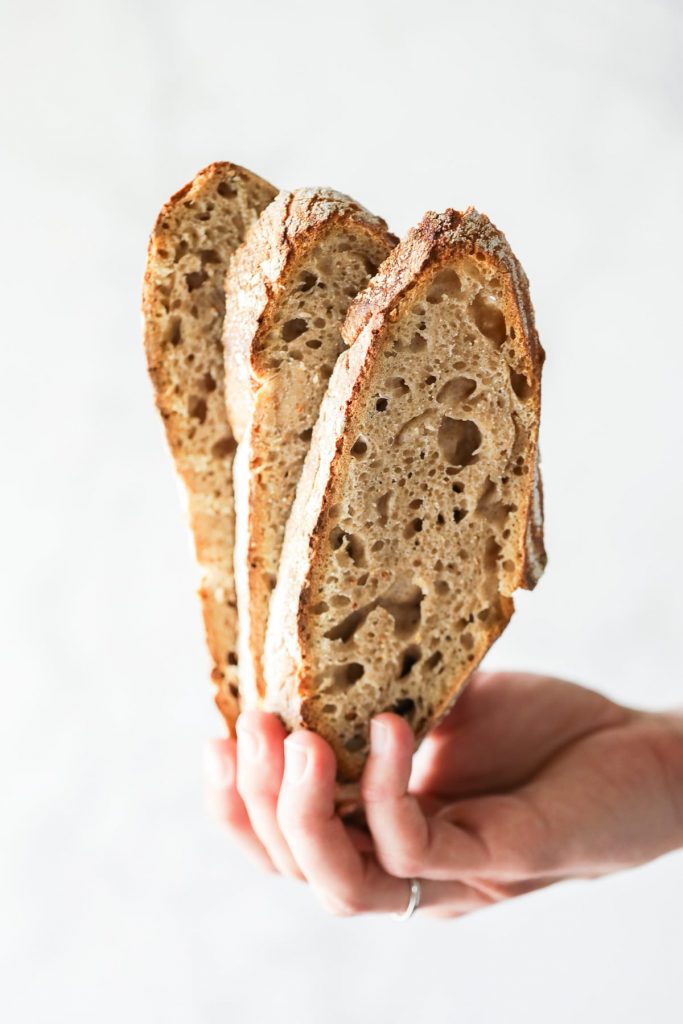 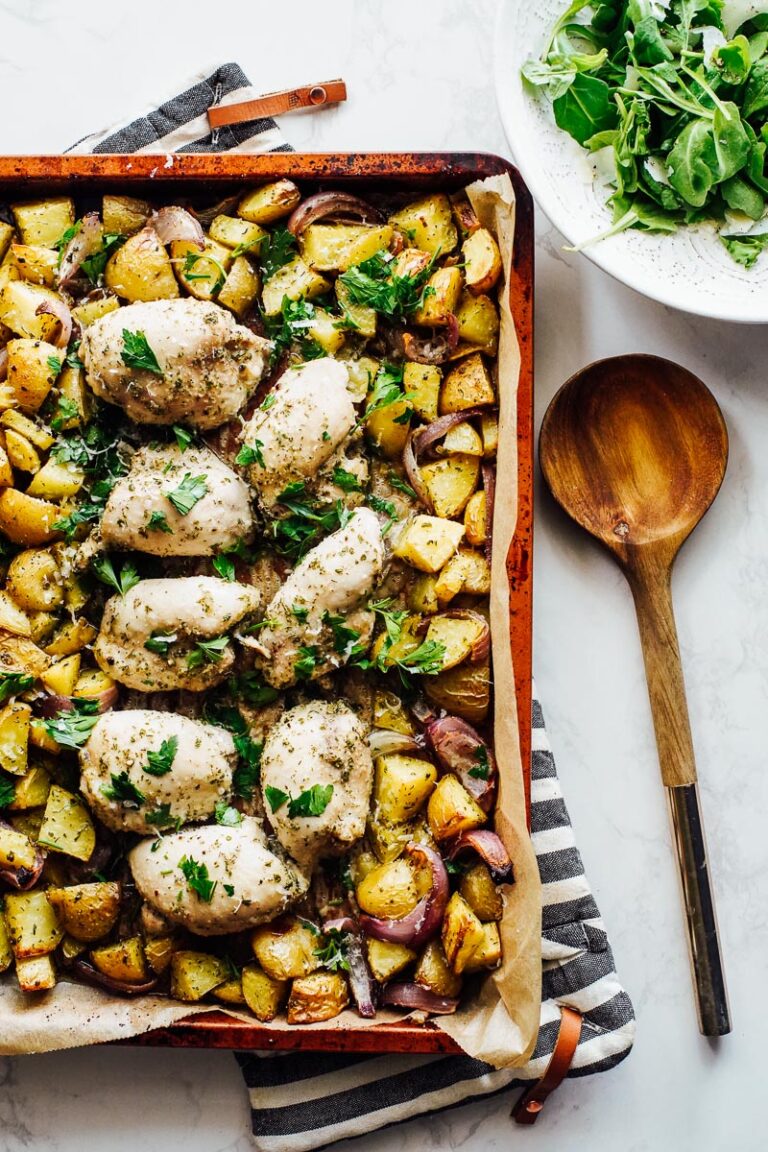 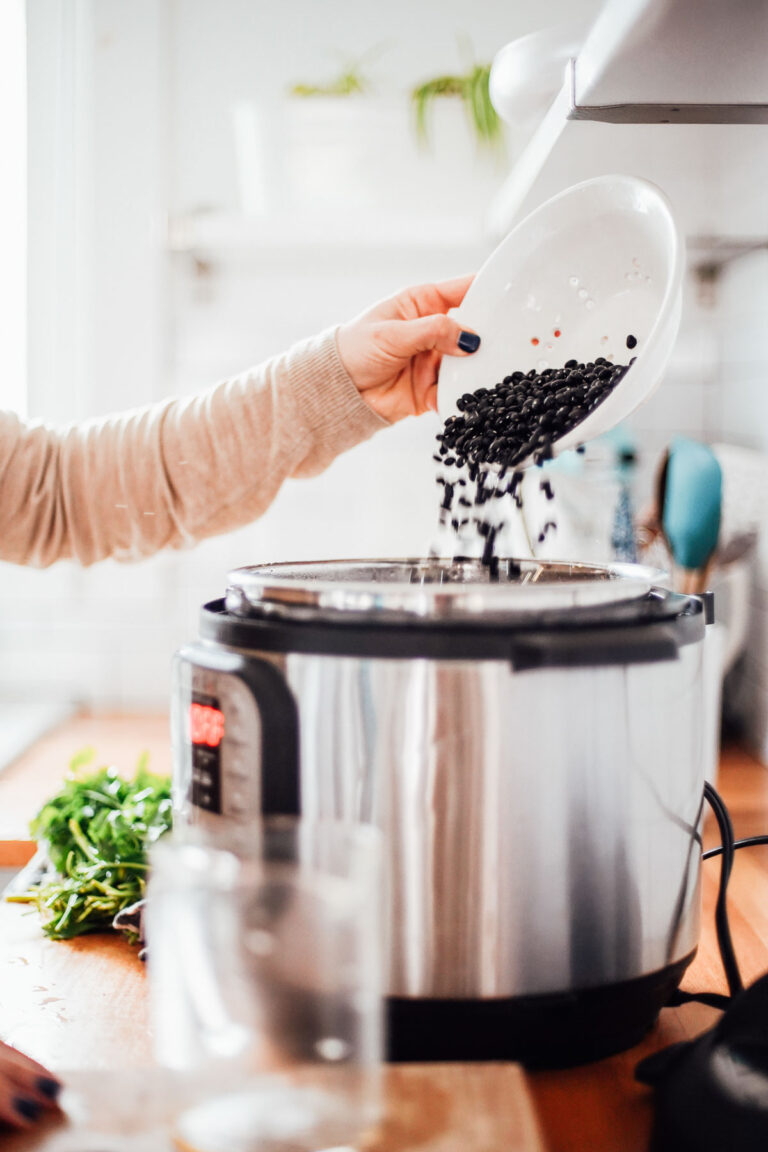