Growing up, Thanksgiving Day was a huge celebration.

The morning started with the Macy’s Thanksgiving Day Parade on the TV, and a home-cooked breakfast at the table.

Later, our extended family would come over to my parent’s house for an afternoon dinner. My mom always prepared a huge turkey and ham, and we enjoyed a plethora of traditional sides: stuffing from a box, mashed potatoes, gravy, some kind of salad, and a weird (Sorry, Mom!) jiggly fruit gelatin thing.

While the dinner was amazing, my favorite part of Thanksgiving was the dessert, especially the homemade pumpkin pie. 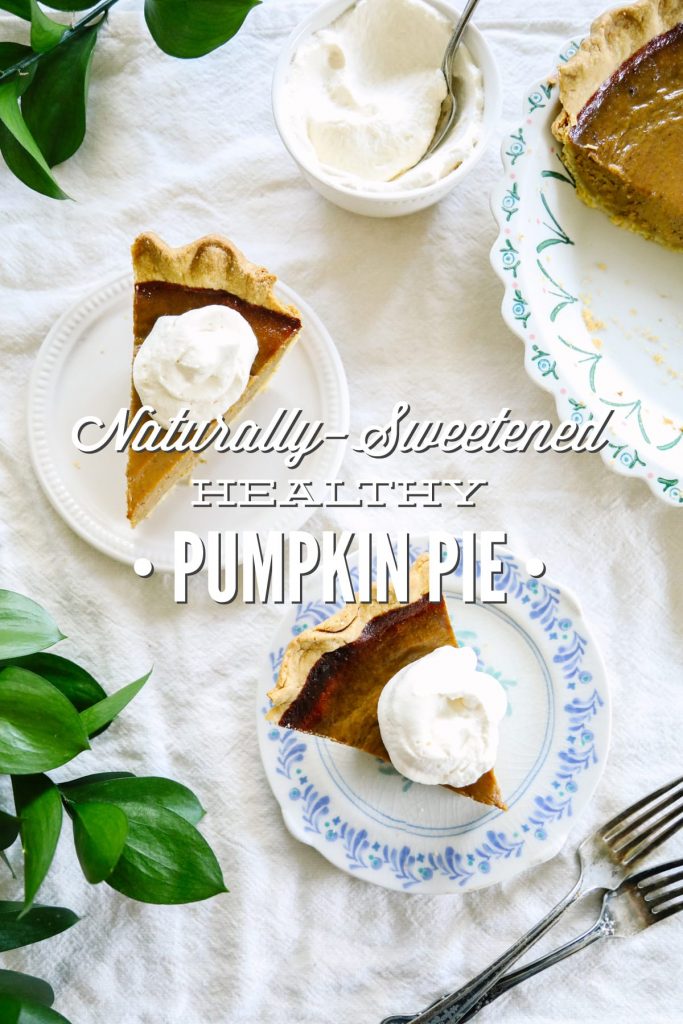 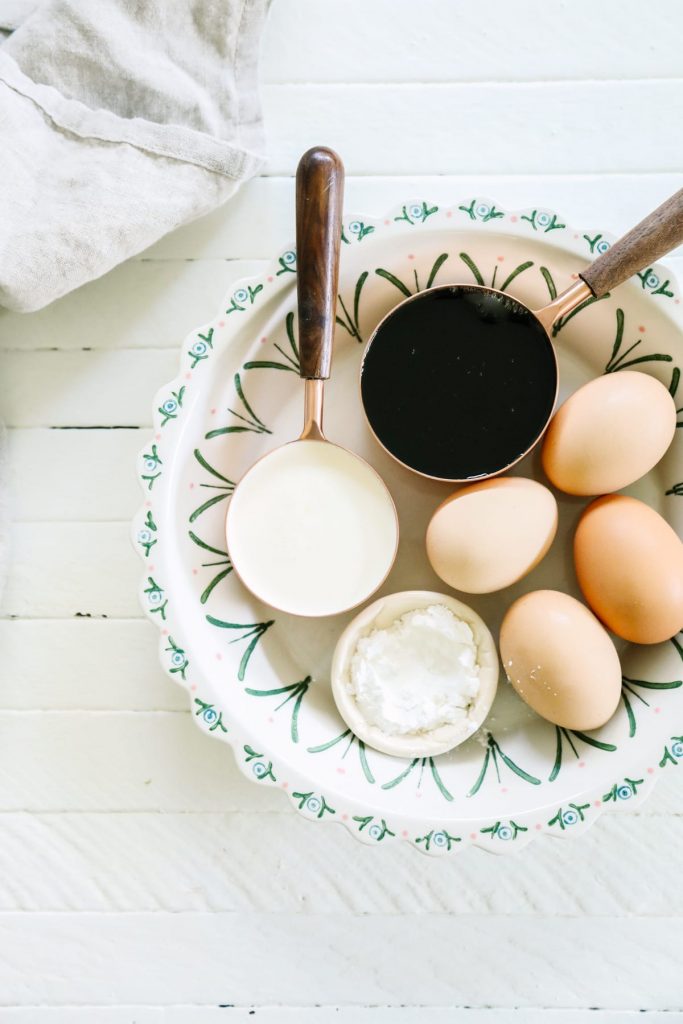 My grandmother (technically, my step-grandmother), was the master pie baker of our family. She always used real butter for her pie crusts, and from-scratch ingredients for her sweet pie fillings. As a child, I wasn’t very interested in learning about making homemade pie. Unfortunately, my grandmother passed away before I ever took interest in baking, so I never learned from the master herself. 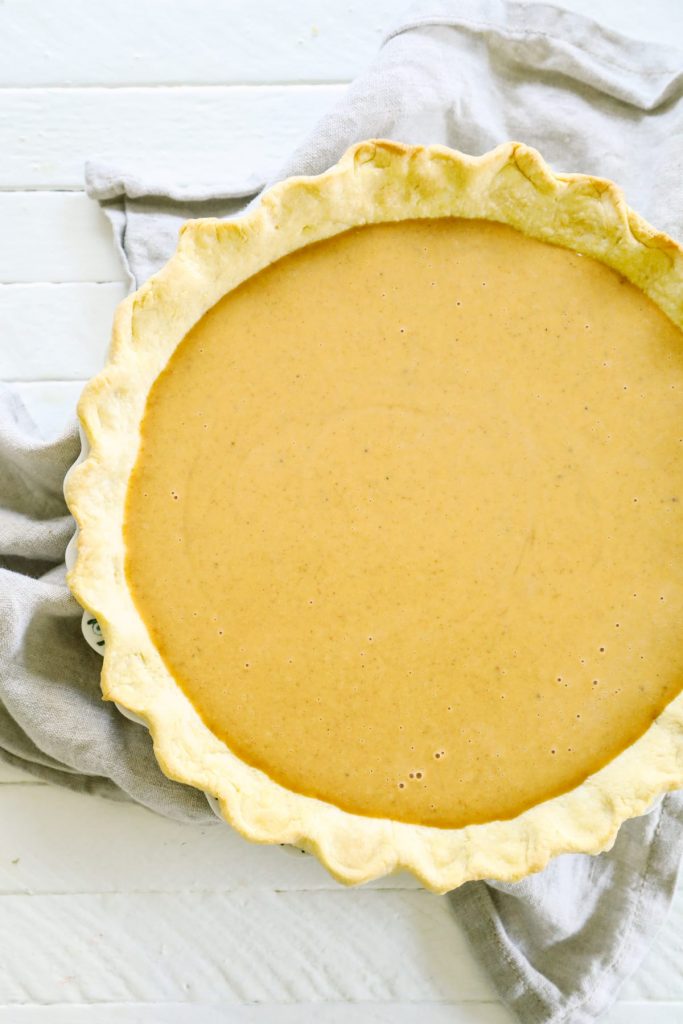 After her passing, we never found a single written recipe in her home. I’m not even sure she ever used written recipes to cook or bake. For her, cooking and baking was an art–a pinch of this and a splash of that. 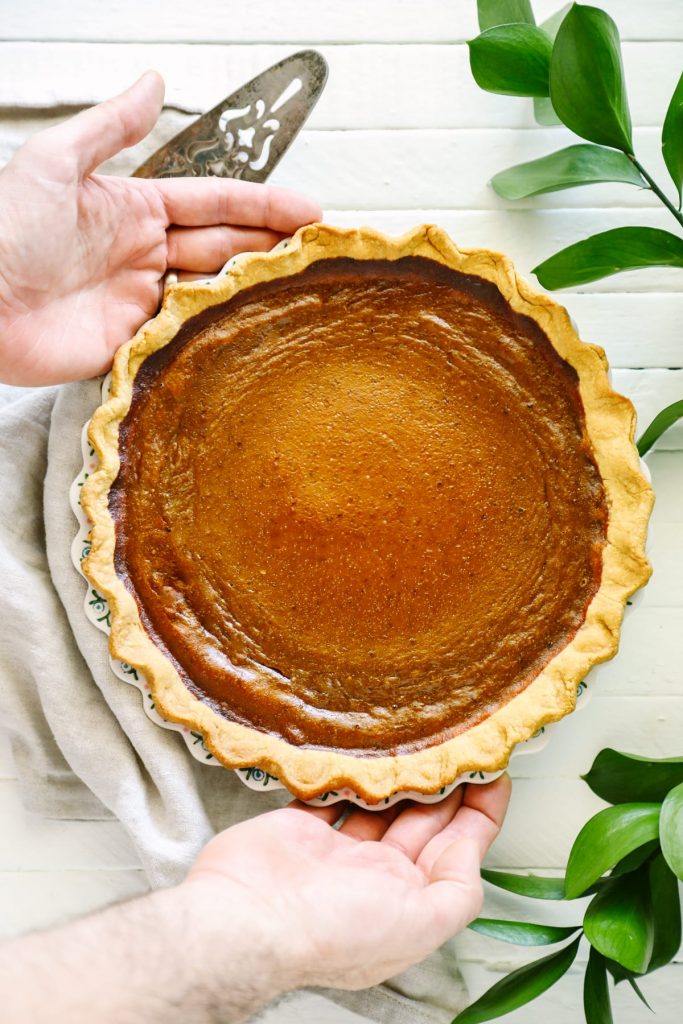 I’ve hesitated over the past few years to create a homemade pumpkin pie recipe. Honestly, I was terrified that my attempts would result in failure, at least when my pie was compared to Grandma’s famous pumpkin pie.

As it turns out, the pie-baking gene was passed on to me, too. I’m convinced that genes can transcend blood relation ;).  Why did I let fear hold me back? 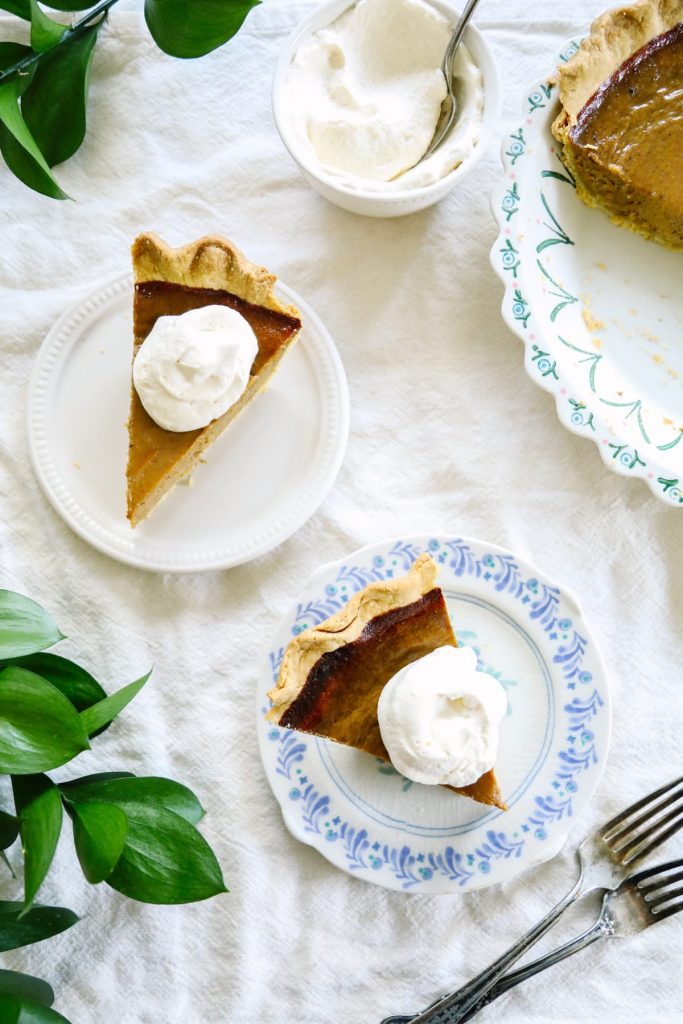 After just a few attempts at making a naturally-sweetened pumpkin pie, with a few tweaks here and there for sweetness and texture, I’m so excited to finally share this recipe with you. 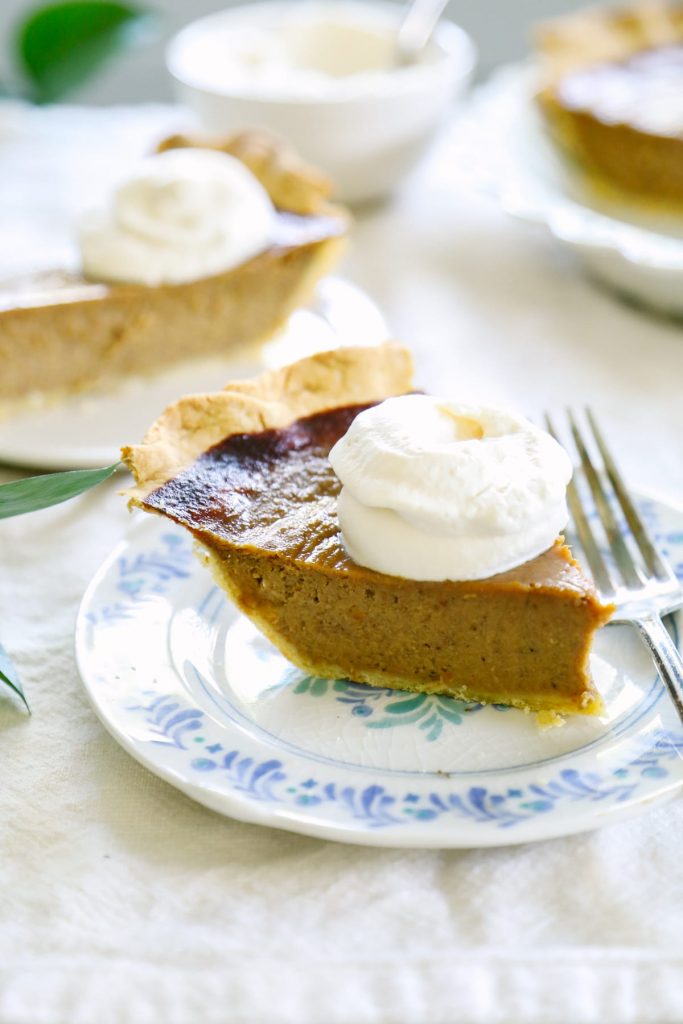 This pie is so easy to make. It only requires one bowl to mix the filling, and one simple pie crust. The filling is made with real food ingredients, so you won’t find any sweetened condensed milk or evaporated milk in this recipe. The crust comes together in less than five minutes, and once it’s baked, the final result is a naturally-sweetened “healthy” pumpkin pie. PS: I’m not a big fan of using the word “healthy” to describe a recipe in 2016, but I think this recipe deserves the title since it’s so much healthier than the alternative (tons of refined sugar, canned milks, and Crisco in the crust).

If my grandmother was still alive today, she would be proud to enjoy a slice of this homemade pumpkin pie. 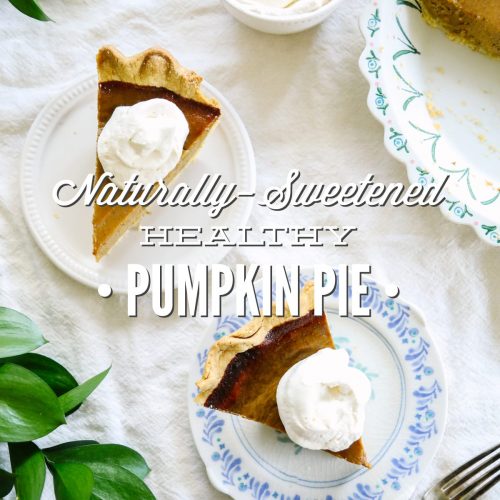 This pie is so easy to make. It only requires one bowl to mix the filling, and one simple pie crust. The filling is made with real food ingredients, so you won’t find any sweetened condensed milk or evaporated milk in this recipe.
Kristin Marr
Print Recipe Pin Recipe
Prep Time10 mins
Cook Time1 hr 10 mins
Total Time1 hr 20 mins
Course Dessert
Cuisine American
Servings 1 pumpkin pie
Calories 2384 kcal

See the notes in the recipe next to each ingredient.

I highly recommend using a from-scratch pie crust, but if you’d like to reduce the prep time involved to make this recipe, I recommend the brand Wholly Wholesome. This company sells real food-style frozen pie crusts. Whole Foods and most health food stores carry this brand in the freezer section. I’ve used their pie crusts in a pinch, and I’ve always had great results.

If you read the ingredient list on many heavy cream options, you’ll probably find carrageenan, which is an ingredient that I like to avoid when possible. I recommend using cream that doesn’t contain carrageenan, if possible.  Natural by Nature and Lazy Meadows are two of my favorite store-bought brands. That said, if you can only find heavy cream with carrageenan added, I think it’s a much better choice than condensed or evaporated milk–so go with the carrageenan option. 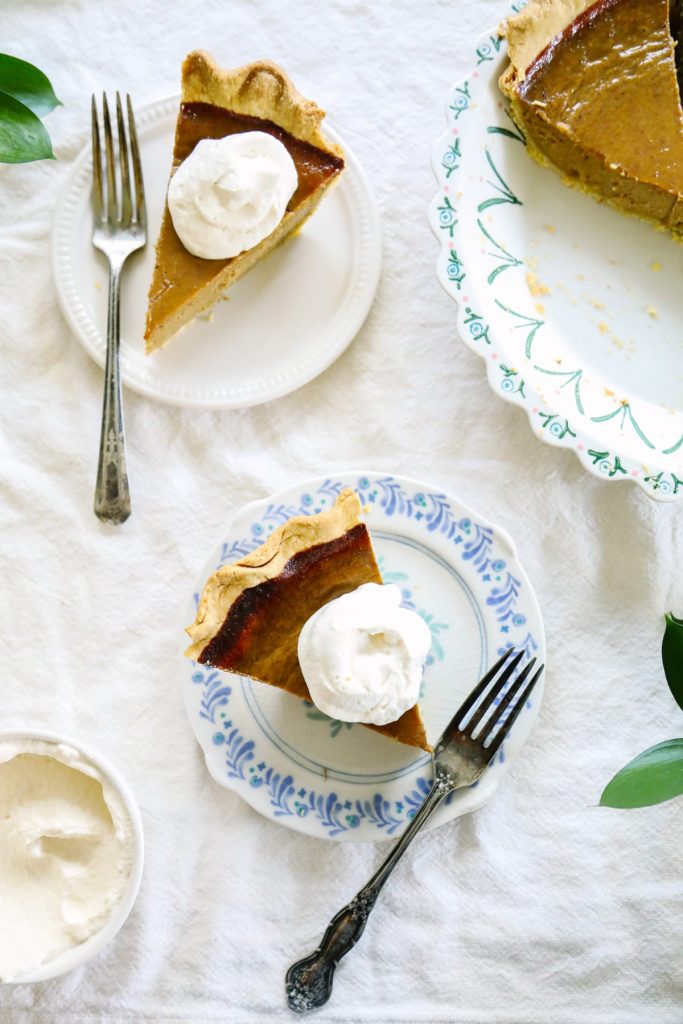 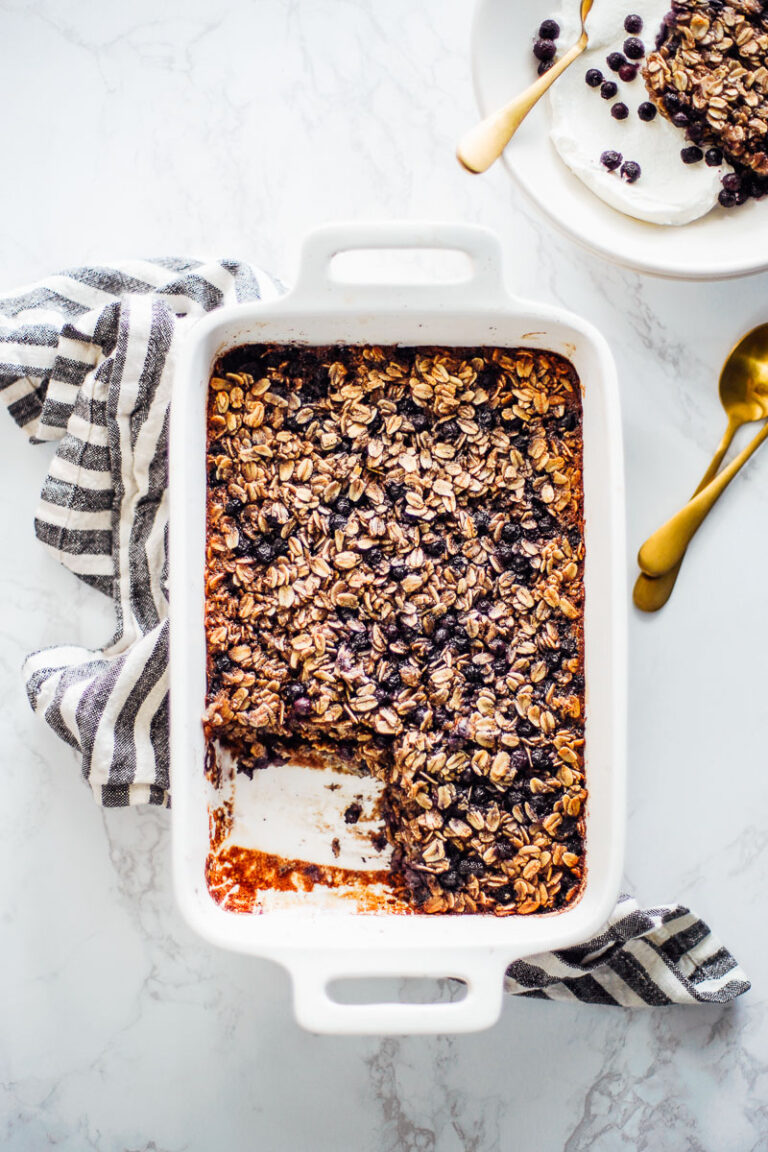