It may sound crazy to start a recipe chat for Almond Flour Banana Bread by sharing that my family eats grains and gluten, but that’s the truth. Now, stick with me for a minute… 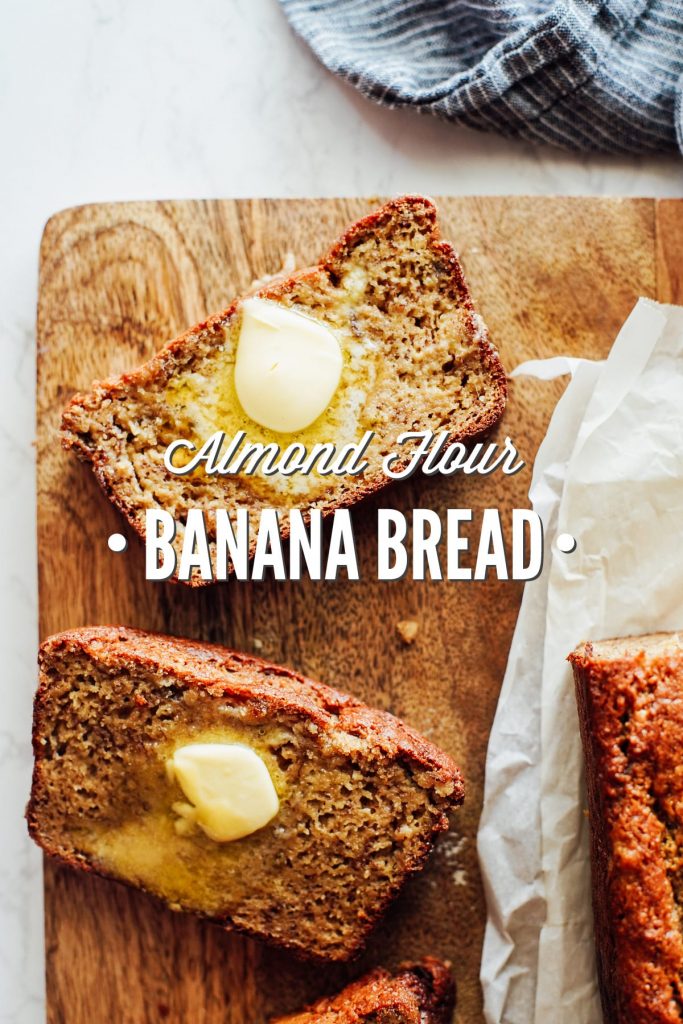 If you’ve been around Live Simply for any length of time, you know that we consume grains, like einkorn and spelt. It’s not uncommon for us to enjoy homemade pancakes, sourdough bread, and muffins using these flours.

I believe ancient grains, organic grains, and grains that are traditionally prepared (using methods that our ancestors practiced for thousands of years to help make grains more digestible, like sourdough) can be a beautiful part of a real food lifestyle. I also know that some people can not tolerate gluten.

I start today’s recipe chat this way (which is all about almond flour, a naturally gluten-free flour, and an incredible almond flour banana bread), because in our day and age gluten is oftentimes villainized. 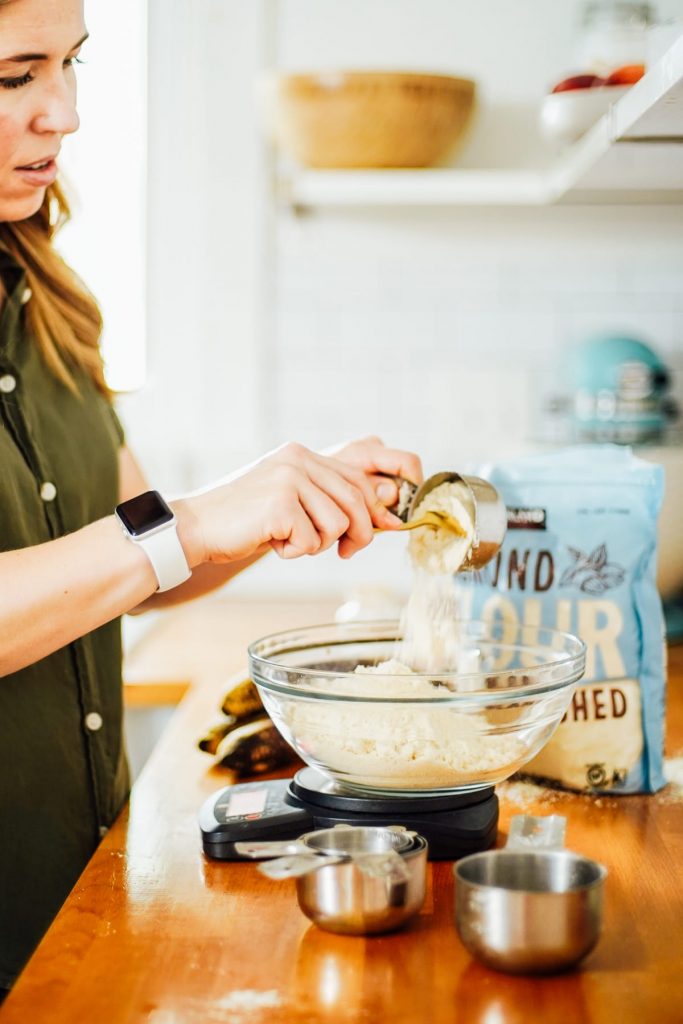 When it comes to the subject of gluten, I believe we need to take a step back and ask more in depth questions about how we consume gluten. We need to look at the fact that our entire diet now revolves around heavily processed and manipulated grains (which includes spraying grains with glyphosate), the type of grain we consume and how that grain is prepared, the lack of variety and seasonality in our modern diet, the fact that we no longer consume fermented foods as our ancestors once did (listen to this podcast episode for information about fermented foods), and mega amounts of stress which wreak havoc on the body and gut.

As Robin O’Brien says, “Are we allergic to food, or are we increasingly allergic to what has been done to it?”

Whether you’re able to consume gluten or not, today’s recipe is for EVERYONE. You don’t have to label yourself as “gluten-free” to enjoy this banana bread or any gluten-free baked good. 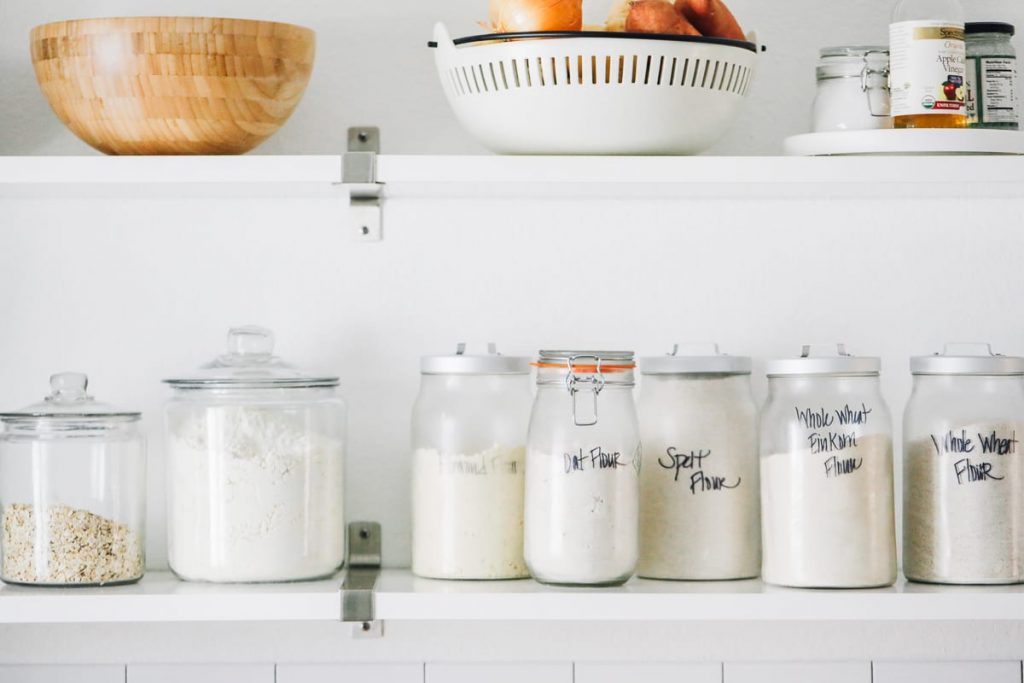 I’m a huge believer in variety, so even if you can consume grains and gluten, I think it’s important to not rely on the same flour over and over again. It’s important to enjoy a variety of foods in your diet. And if you are gluten-free, this holds true as well. Maybe this means rotating out the flours you use for baking. 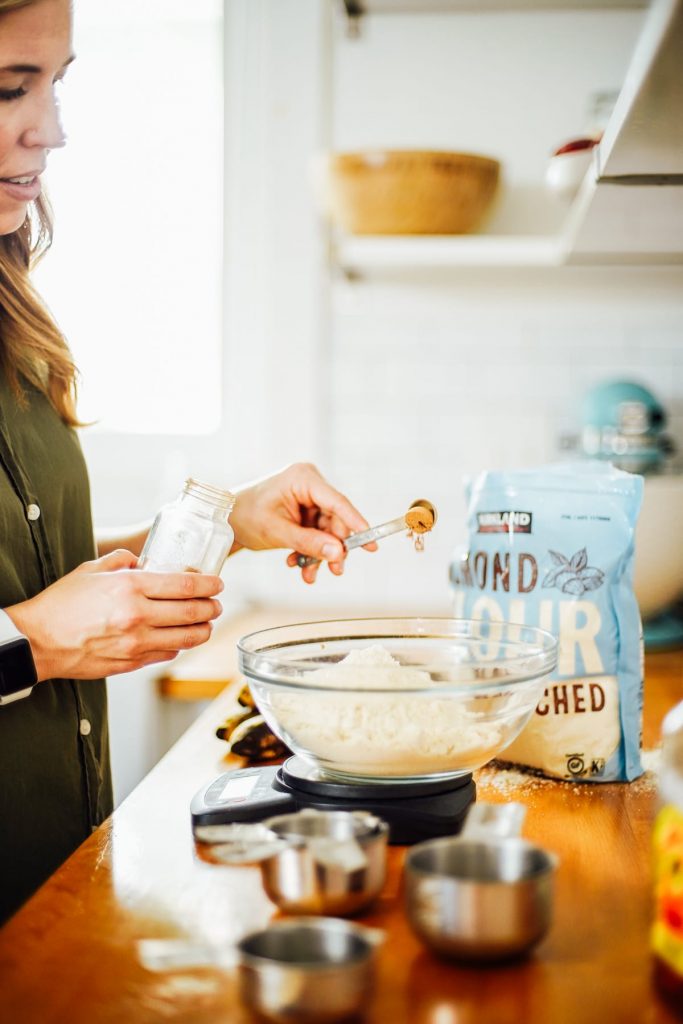 I’m not saying you have to overcomplicate things. I’m simply suggesting that variety is a good thing. This variety looks like eating seasonally as produce changes (even real milk changes with the seasons), as well as cooking and baking with a variety of staple ingredients (such as: flours, grains–like rice and quinoa, meats, etc.) When you consume real food, it’s very natural to add variety to your diet.

I hope today’s recipe becomes a favorite that you add to your meal rotation. This is a recipe that I originally shared on Live Simply back in 2013 (the birth year of the blog). Now, six years later, hundreds of thousands of people have made this recipe. Today, it’s time for an update. 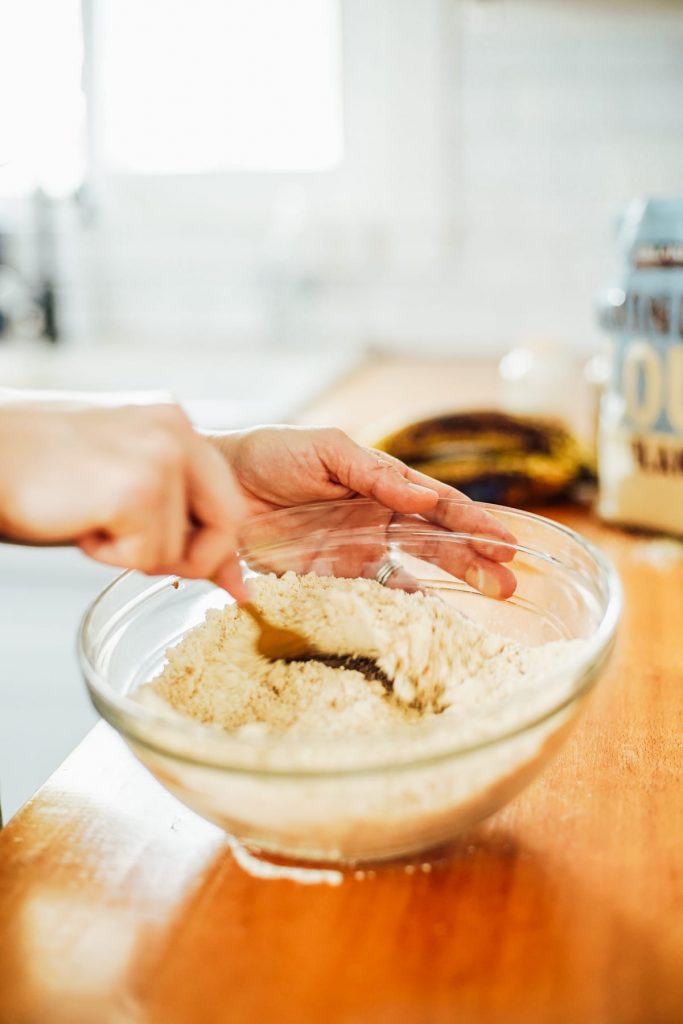 What is Almond Flour?

As you probably guessed from the title, the base of this recipe is made with almond flour.

Almond flour is made by grinding almonds into a powder, which makes a “flour” that may be used in the kitchen to prepare various meals, including: cakes, muffins, breads, and even used as a binder in meatballs or a meatloaf (I do this often as an alternative to breadcrumbs). 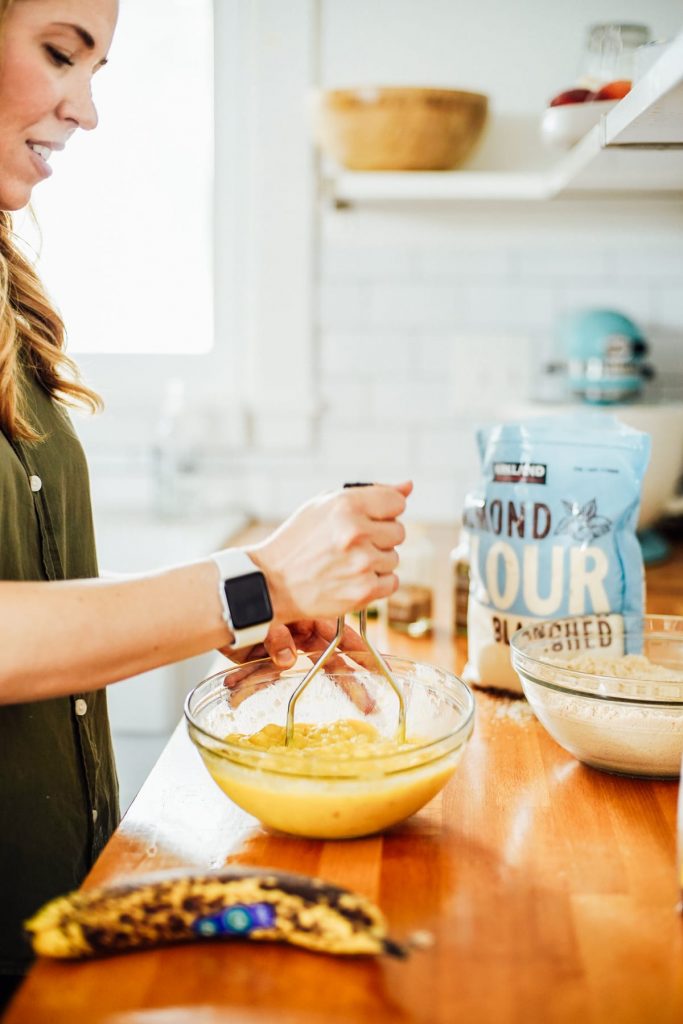 Since almonds are naturally gluten-free, almond flour has become a popular gluten-free flour choice for baking. The flour definitely takes some getting used to since it doesn’t sub 1:1 with a gluten flour (like all-purpose flour). But once you get a feel for this flour, it’s delicious and easy to work with.

Almond flour adds a nutty, naturally-sweet flavor to baked goods. This means many times you can get away with using less sweetener in a recipe because the almonds naturally lend a sweet flavor to the baked good. 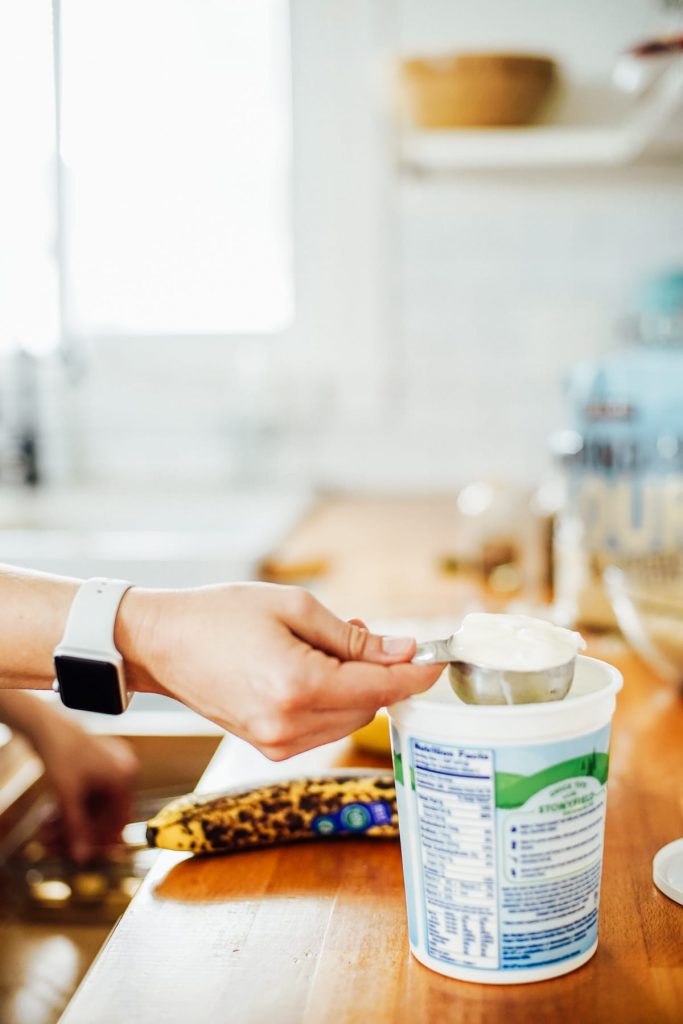 Blanched almond flour, the flour used to make this banana bread, is made by grinding up almonds that have had the skin removed. This is typically done by dropping the almonds in boiling water for just a minute or two, then cooling the almonds and peeling away the skin. Once the skin is gone, the almonds are “blanched.” Blanched almond flour is a yellow/cream color, and is typically light and fluffy so it’s ideal for pastries and lighter cakes and breads.

Almond meal, on the other hand, is made by grinding up almonds with the skin attached. Because of the skin, this flour is typically brown, has a coarse texture, and results in heavier baked goods. 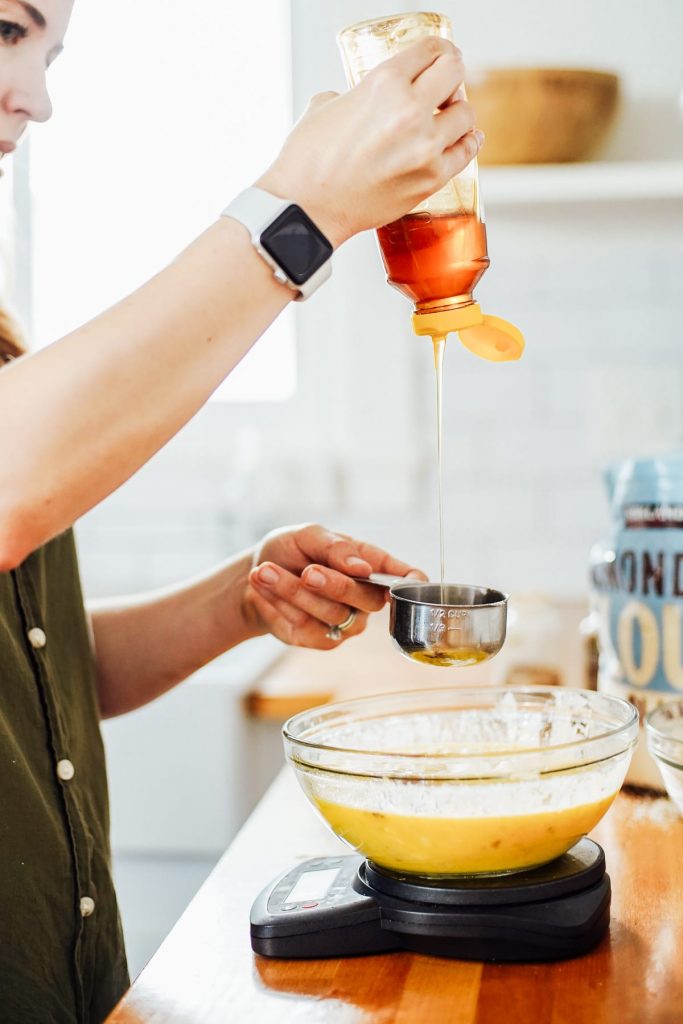 If you want to learn more about the differences between blanched almond flour, almond meal, and how to use these flours for baking, this post from The Kitchn is helpful. Plus, you can see a visual difference between the flours, which is helpful when shopping.

For today’s recipe, I recommend using blanched almond flour. You’re welcome to try using almond meal, if desired, but the bread may not be as light.

Where Can I Find Almond Flour? 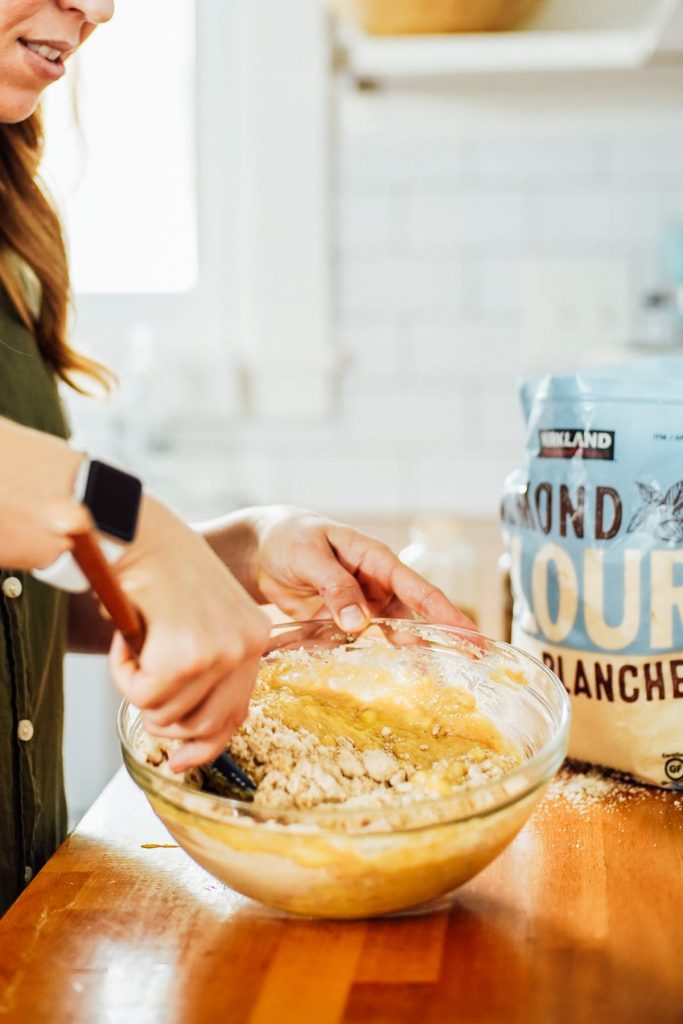 Now let’s talk specifically about today’s updated recipe. Remember, this was a recipe that I originally shared in 2013 when the blog was just a baby. Over the years, thousands of people have made this recipe and shared the recipe on social media with friends and family. Before making this  recipe, here’s what you need to know: 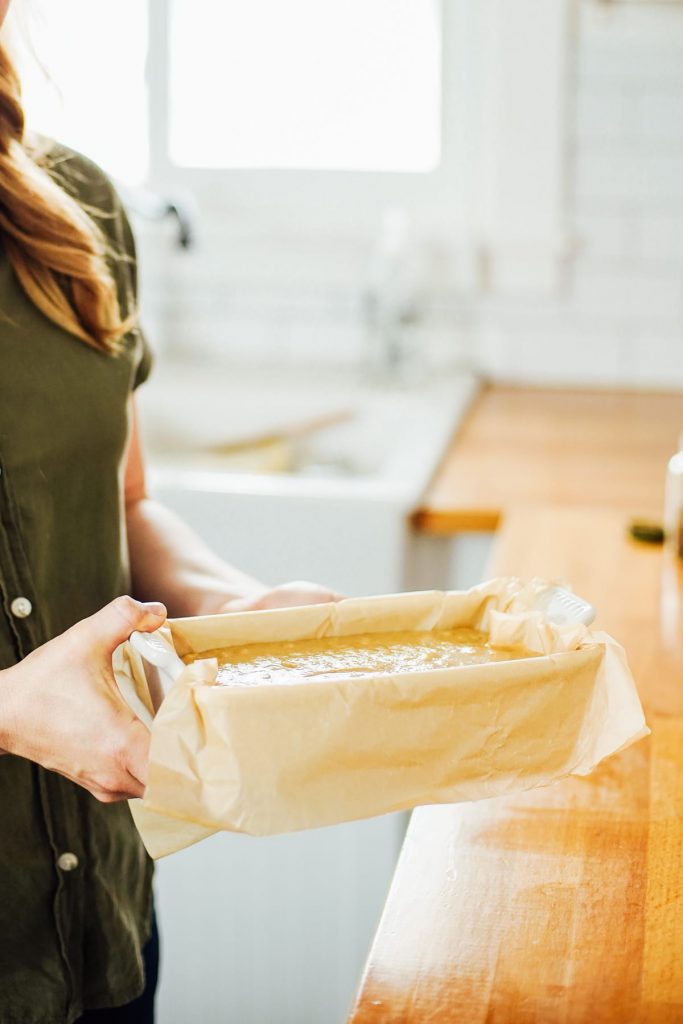 There is one thing that I highly recommend for fail-proof baking: a scale. Well, actually, two things: a scale and quality ingredients.

It’s so important to weigh ingredients. This isn’t something that most Americans are used to hearing. We’ve become accustomed to relying on volume (cups) for baking. But here’s the issue: my cup of flour may not be the same as yours. In fact, it’s probably not. There are too many variables involved with volume measurements. This means that my results may be different than your results and vice versa.

When it comes to baking, I recommend weighing your most important ingredients. Plus, weighing ingredients is much easier; just keep adding ingredients to the bowl until the scale essentially tells you to stop. Trust me, it’s easier and way more precise. If you’ve ever made a (baked good) recipe and it didn’t turn out quite right (and the recipe is solid), it’s probably because there was too much flour added (or not enough). This is far too easy to do with volume measurements.

I’ve been using this scale, which we originally purchased for making coffee (weighing coffee beans), for a few years now. 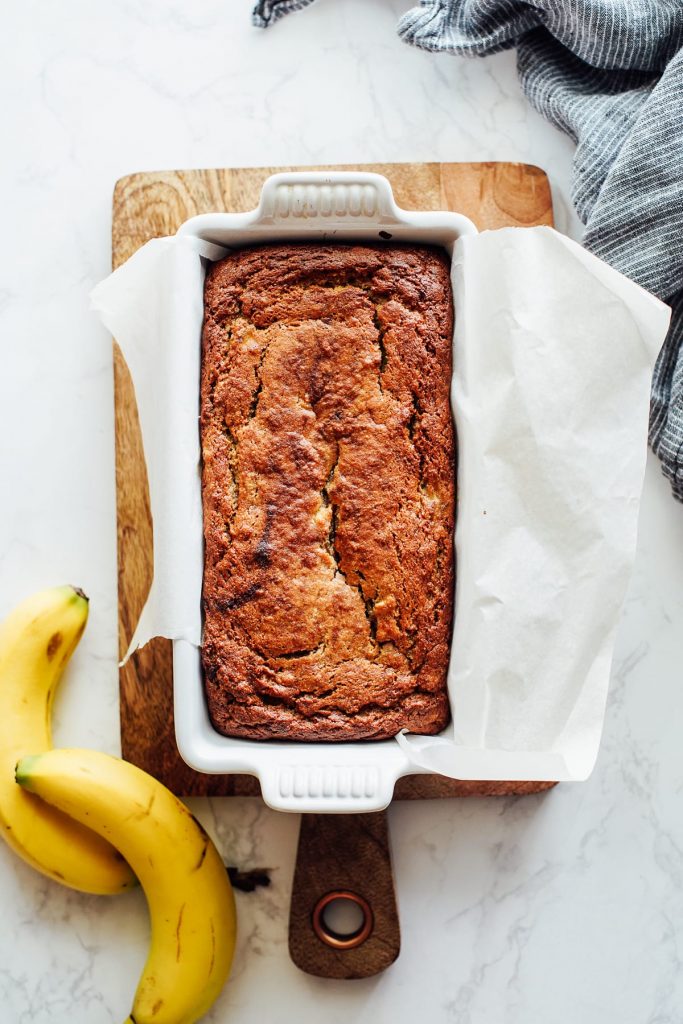 2. This bread is very moist.

Thanks to the almond flour, this bread is incredibly moist. If you haven’t baked with almond flour before, this may come as a surprise when you first slice into the loaf. You may think the bread is slightly under-cooked, but it’s not. That’s just the almond flour shining through.

One of the reasons I’m re-sharing this recipe is because, in the past, some folks had issues with the bread being under-cooked. The new and improved recipe now includes a small amount of arrowroot starch to keep this from happening. This starch is gluten-free, so it doesn’t compromise the naturally gluten-free nature of this recipe (read more about arrowroot starch, here). That said, this bread is still super moist, which is what most people (including myself) love about this recipe. In my opinion, that’s what makes this banana bread the absolute best.

I recommend waiting to cut into the bread until it’s cool. If you cut the bread while it’s still hot (and this applies to many almond flour baked goods), the bread will almost be too moist. So wait at least 20 minutes after pulling the bread from the oven to begin slicing. 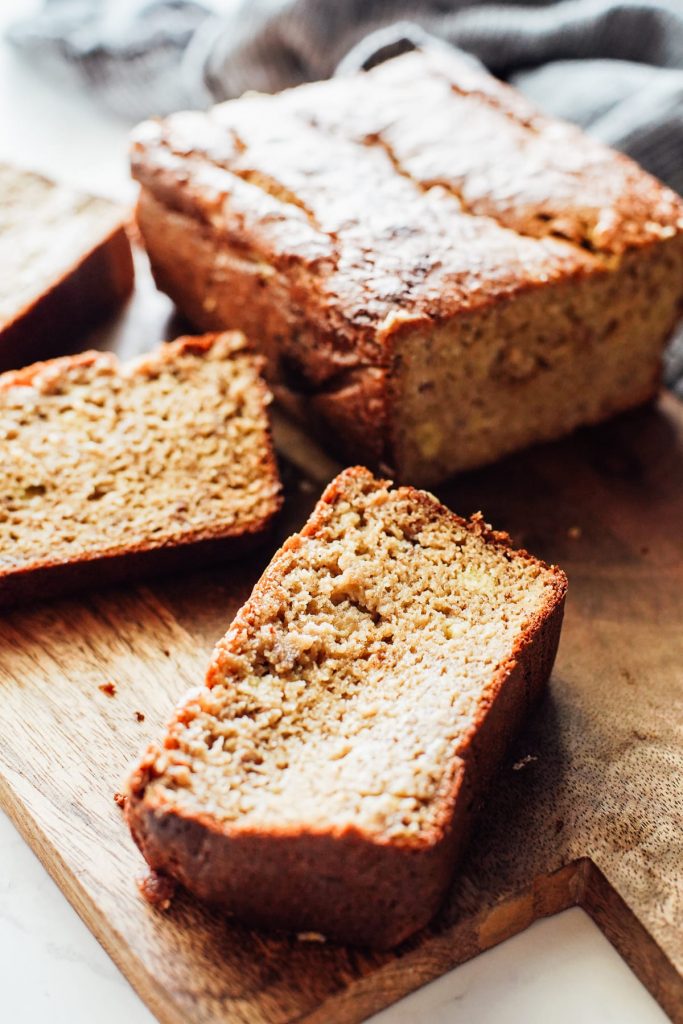 3. Add this bread to your food prep plans.

Because this bread is so moist, it doesn’t dry out in the fridge. This makes it a great bread to prep ahead on the weekend and enjoy throughout the week with breakfast or lunch, or even for dinner with soup or a salad or roasted chicken and veggies. My kids love this bread, so it’s a recipe I rotate often in our weekly breakfast menu. Once the bread cools, store the bread in a bag. Or, cut the bread and store the slices in a large air-tight container (my favorite prep containers can be found, here). Store the bread in the fridge for up to 5 days. 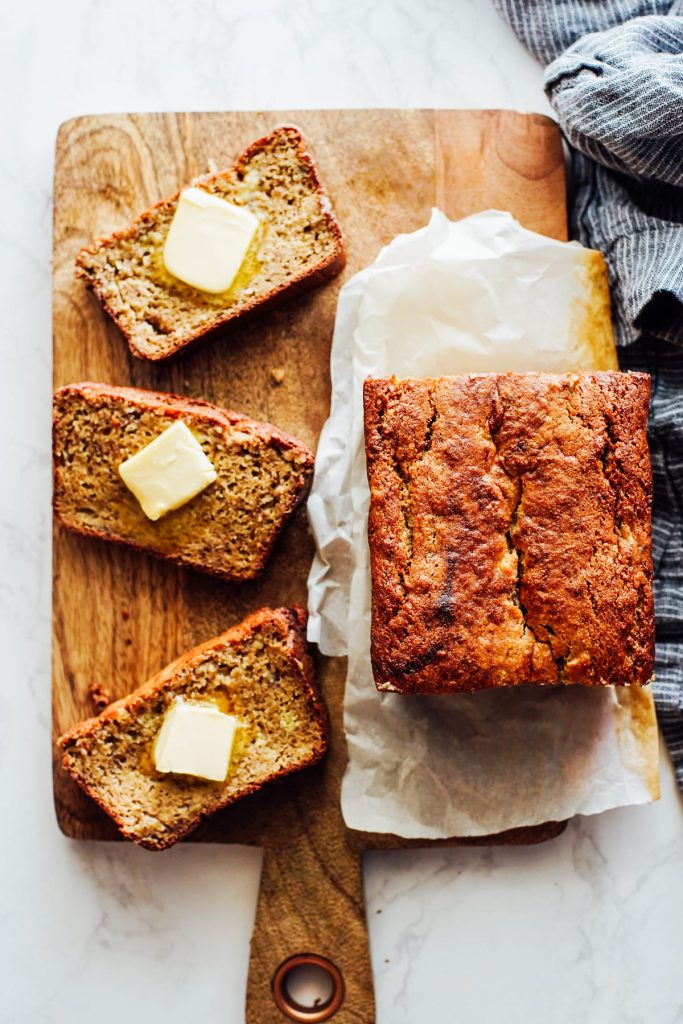 This recipe video was made a few years ago, before I added arrowroot starch to the recipe. The banana bread recipe concept and step-by-step method are the same, just imagine arrowroot being added with the dry ingredients. 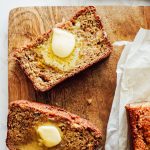 So heavenly, it’s now a regular staple on our breakfast table and quite simply the best banana bread ever. Made with simple real food ingredients, like almond flour. Gluten-free and optional dairy-free alternatives.

2019 Update: The original recipe, published back in 2013, did not include arrowroot starch. It also called for 1/4 cup of chopped walnuts (added to the batter). I've found this recipe works best with the small amount of arrowroot now called for in the recipe. If you loved the original version and don't want to include arrowroot starch, I completely understand. By all means, you're welcome to leave it out. That said, I highly recommend using the arrowroot starch. It makes a tremendous difference in the final texture of the bread. Also, if you loved the walnuts, you're welcome to still add them. Keep in mind, you won't see the addition of arrowroot in the video, as the video was made a couple of years ago.

Carb Information: I purposely do not share nutritional information here on the blog, because I believe in eating real food versus counting calories and numbers. But I have received many requests from folks following keto (by the way, I recently hosted Dr. Axe on the podcast and we talked all about keto) and wanting the carb information for this recipe. The number provided is for an entire loaf, not a slice...Carbs: 285g. If you choose to use honey, the carbs will increase.

How to Use Almond Flour Beyond Banana Bread

I know, you really want to make this almond flour banana bread. I get it. I promise, the recipe is coming up next. Before we bake together, I want to share a few of my favorite ways to use almond flour beyond today’s banana bread recipe…

Note: This post was originally shared in June 2013 with an update to photos and important information to help you as a reader, in 2020. 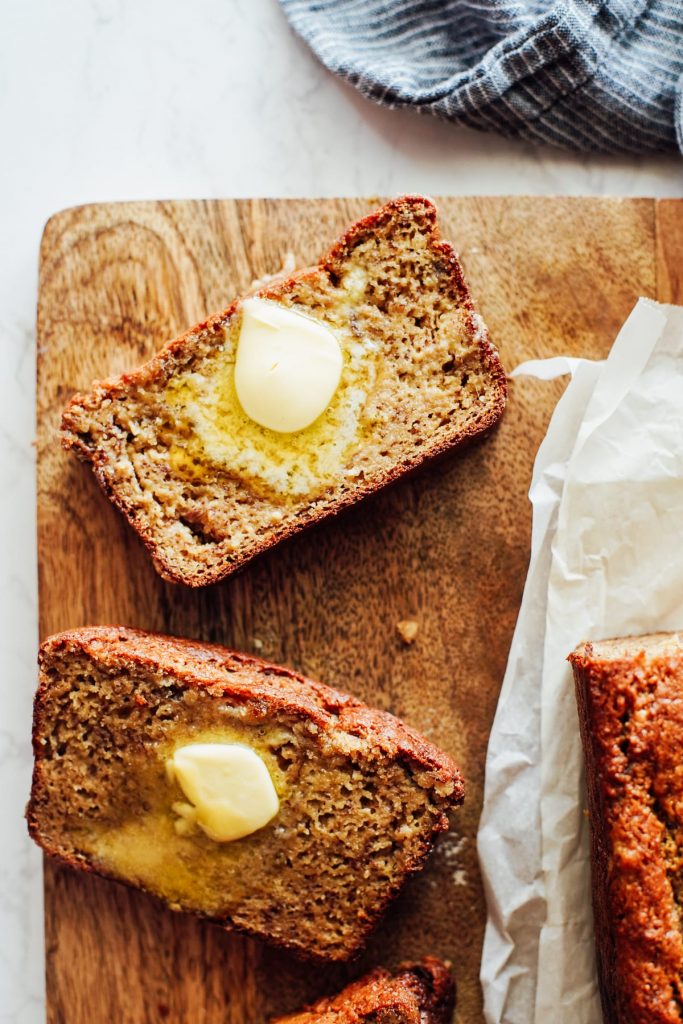